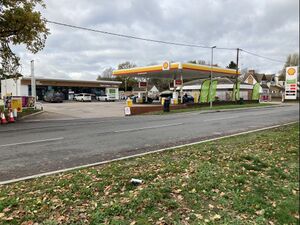 A small petrol station at the roundabout on the new part of the A43 near Northampton.

The site branded as Total in 2012, shortly before the Shell takeover.

The petrol station dates back to the 1930s, when it was a local garage on the main A43. In the 1980s the A43 north of here moved onto the new dual carriageway, and the old garage was relegated to being on the old road, the cul-de-sac called Park View.

By this stage it was a Fina petrol station. Fina redeveloped the site in late 1998, adding a new canopy and sales building in the process. They also later gained outline planning permission in 1999 to add a restaurant at the back of the site, but this was never carried forward.

Fina became Total in 2000, with the site rebranding to Total to match this. In August 2012, Total sold the petrol station to Shell following their nationwide shutdown and a small number of official "services" directions were placed around the junction.

The road layout was changed again when the A43 was moved onto Thompson Way in 2018. Signs on the new road provide directions to the service area.

The car and jet washes were removed in summer 2022 to make way for a new sales building, reopening in October 2022 as a Little Waitrose store. Four new Shell Recharge electric vehicle charging bays are due to be added to the site too soon. Strangely, the existing sales building wasn't demolished as part of the works and now sits empty.