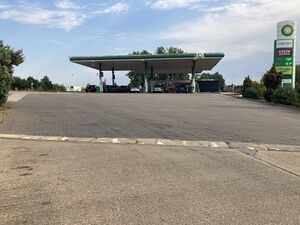 A rare example of a service area with its own roadside diner attached, and an independent one at that. 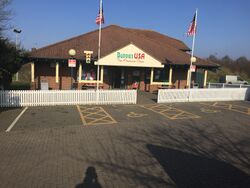 In practice, that secret road is probably more useful for traffic on the A45 which has taken the wrong exit by mistake. The real entrance to the service area is the second of two exits that are positioned very close together.

Despite the two routes into it, Grange Farm services was separated from the A45 by a council boundary. The service area was in South Northamptonshire while everything to the west of it, including the A45, was in Northampton borough. This anomaly was rectified when both sides became part of West Northamptonshire in 2021.

The service area is built on the former sand pit at Courteenhall Grange Farm, which was positioned next to the single carriageway A508. Permission was first sought for the sand pit to be developed into a service area in 1979. Grange Farm services opened in 1986, with a Burmah forecourt.

With the forecourt open, there was interest in adding a restaurant to it. Happy Eater received planning permission for a restaurant, but it was AJ's who opened a restaurant here in 1987.

Further plans for the site were put forward in 1988, with a two-storey hotel and a new sales building incorporating an additional restaurant were proposed, along with a new lorry park to the east of the site. This was approved but never built.

After AJ's was sold, the restaurant later became the Northampton branch of Little ChefHistory in 1997. A Burger King franchise was included.

Grange Park was identified as an area for major development in the 1990s. This began with the upgrading of the A508 to become a dual carriageway, meaning Grange Farm would now be a service area for southbound traffic only, but with the potential for an increase in traffic. A new junction, the Wootton Interchange, was built around the service area, reducing the land available for development.

This period of change was completed with the A508 being renumbered to A45 in 2001, making it very clearly part of the route for cross-country traffic.

At the service area itself, the Burmah forecourt became BP in 2000, following their takeover. The forecourt store later gained Mace branding, before changing to Costcutter in 2017. The forecourt also gained two InstaVolt electric vehicle chargers in the late 2010s.

The Little Chef closed in around 2005. The building reopened as local restaurant chain Buddies USA Diner in 2006. All Buddies branches closed in the middle of 2020, but this one was then reopened by their original owner on 14 December 2020. It would now be called 'Hamburger Heaven '81', taking its name from when the first Buddies diner opened in 1981.