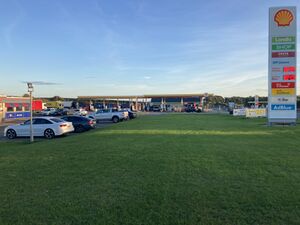 A19 between Easington and Middlesbrough

A pair of older forecourts which are sometimes known as simply "the A19 services". 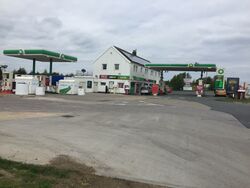 The older northbound building, with BP and Subway branding in 2019.

The A19 Café was added to the northbound forecourt in 2002 to attract potential tenants to the development land. A new shop and A19 Café were also added to the southbound in September 2007. The cafés were replaced with new Subway franchises in late 2014, before being replaced by several grab and go options in 2020.

A new fuel supplier deal was signed on 28 July 2008, with both sides rebranding from Total to BP. This later changed again in June 2019 from BP to Shell.

Both sites gained Mace stores in around 2010, before these were changed to Londis in November 2016.

Both sides of the service area have several acres of land available for expansion. Since the start of the millennium, three restaurants and two hotels have all been proposed. The only additional facility that has been added to the southbound side is an OK Diner restaurant in 2004. The Ron Perry website still claims that land for development is still available, but there is no evidence of any progress, and the land remains bare.

Ron Perry & Son also built the Stotfold Crest Estate and Riding School adjacent to the southbound site in the 1990s. As a result of this, both sides are now sometimes referred to as Stotfold services.

Ron Perry are now looking at adding electric vehicle charging facilities to both sides in the near future.