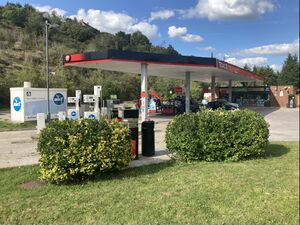 A small service area as the A465 leaves the M4.

Parking and use of the forecourt is for forecourt customers only and is strictly enforced.

The service area here was developed by Thornfield Roadside Ltd in 1991 as a filling station and motorists restaurant combination, with permission granted in April 1992. The site opened in 1995 as an Elf filling station alongside a McDonald's Drive Thru restaurant.

The forecourt went onto be owned by Malthurst under Pace branding in the early 2000s, before rebranding to Total in the mid-2000s. In 2010, the site was rebranded to Texaco. Malthurst later became MRH, and in 2016 they rebranded the site to Esso with one of their own-brand Hursts stores. MRH was then acquired by MFG in 2018, who in 2019 reverted the forecourt back to Texaco before adding a Londis store during summer 2020.

The McDonald's restaurant went onto gain several extensions and reconfigurations, and in 2018 gained an external children's play area. The car park also gained a cash machine in 2001, situated in its own brick building, but has since been removed with the brick building remaining.