A491 southbound between Bromsgrove and Stourbridge

This is the service area on the A491 in Worcestershire, not to be confused with Blue Bell Hill in Kent.

The Worcestershire village of Bell End has its own signposted service area, although for some reason it doesn't go by that name. 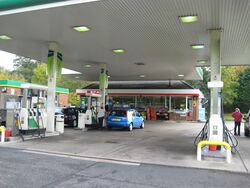 The forecourt branded BP and SPAR in 2009.

A pair of petrol stations, one on either side of the road, date back to the early 1960s here: northbound was known as Belbroughton service station, and southbound as Bell End service station. The southbound filling station opened in around 1963 and was branded 'National' throughout the 1960s and 1970s.

The Happy Eater was converted in 1996 to become the Belbroughton branch of Little Chef. This later closed in 2001 when it was converted to offices and became home to Barberry.

The site was later acquired by MFG who converted the Spar store to Londis. They currently hold planning permission to extend the sales building to introduce a Greggs store to the site, which was originally planned as a Subway, and to install one of their 'MFG EV Power' forecourts which will include 8 electric vehicle charging bays.