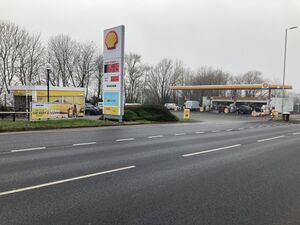 Only one photo tagged with Manor Way. If you have one, why not upload it?

A456 westbound between the M5 and Hagley

A petrol station and former Little Chef site less than a mile from M5 junction 3.

The site was involved in a collision in 1986, where a passing lorry entered the forecourt, causing £10,000 worth of damage to six cars, narrowly avoiding the fuel pumps.

During the late 1980s, Mobil teamed up with Trusthouse Forte to redevelop the site. The new site would feature a new, larger Mobil filling station alongside a new 60-seater Little Chef restaurant, which would be their Halesowen branch. The new facilities opened in 1990 and were treated by the Department of Transport as a full service area.

Following Mobil's merger with BP in 1997, the site was rebranded to BP. Following the rebrand, it became known as Greenfields service station, a nod to the green belt land that the site sits on. Granada also intended to rebrand the site to a Little Chef Express in the same year, but this didn't happen.

Following Permira's takeover of Little Chef in 2002, the restaurant was deemed to be unprofitable and was closed, with the land returning to BP.

The BP forecourt was redeveloped again in 2004, with the site becoming a BP Connect site, gaining new pumps and a larger sales building incorporating a new Wild Bean Café offering. The vacant Little Chef restaurant was later demolished in 2006 to make way for a new car wash.

The site was sold to Shell in 2010 who added their Select store to the site. Shell also replaced the underground fuel tanks on site, which required the site to be closed for a full 12 months throughout most of 2012.

The site briefly gained a Little Waitrose offering in 2018, but this was removed later in the year.

An effort to sell the vacant Little Chef site in 2012 attracted no interest, with one businessman blaming restrictions on the land use. One proposal for the empty car park was to turn it into a coffee bar and classic car showroom. Enterprise sought permission to use it as a car rental office in 2015, but permission was refused on the grounds that it was an inappropriate use of green belt land. The land became a private car park in 2022.

Responsibility for the A456 was passed to Dudley Metropolitan Borough Council in 2008, who haven't touched the signs since, and may not even be aware that they are there.