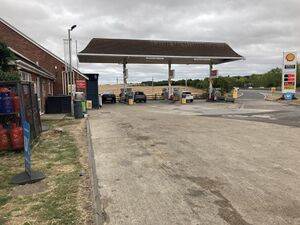 A34 southbound between Newbury and Didcot

The smallest service station on the main A34 - Berkshire Downs is a little forecourt by the southbound carriageway. 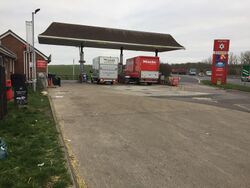 The forecourt with Murco branding, pictured in 2019.

The forecourt dates back to the 1950s, when the A34 was a much slower, single carriageway road. The building attached to it was known as The Retreat.

In the 1970s, plans emerged to upgrade the A34 to a dual carriageway, by building a second carriageway to the west. This attracted a flurry of plans for new service areas in the Chilton area. The garage owners wanted to rebuild it and add much more lorry parking.

BP planned to build a northbound service station by the new northbound carriageway in 1976. This seemingly innocuous idea caused a storm, as the Vale of White Horse District Council said they were "astounded" to see that BP knew every detail about the proposed new carriageway, even though the council hadn't been consulted on it.

Permission was granted to upgrade the existing filling station in 1979, but other plans in the area were rejected. Oxfordshire County Council was receiving a lot of proposals for new services on the A34, and was only receptive to locations it approved of: initially Abingdon, then they moved towards Milton Heights.

In 1985, Heron wanted to take over and rebuild the service area, adding a family restaurant. They also considered building at the Chilton and West Isley junctions, and there was another plan for a northbound service area. Further services were planned nearby at Manor Farm, near Drayton. The county council again ruled it was happy with the existing provision of services, including the site about to open at Chieveley, and that this would not be an appropriate place for one. Esso continued to try to build service areas at the Chilton junction, including building new north-facing slip roads.

By the 1970s the forecourt was a 24-hour BP. It then became Shell, and was Murco by the 1990s. It then changed ownership to an independent dealer, who by the end of 2015 had introduced a Tchibo coffee machine and unbranded the Mace store, with hopes to open a SPAR store.

In 2016, the service station changed hands again with a separate SPAR store planned to open. This only went as far as introducing a SPAR-branded range to the store; new branding wasn't added.

It was acquired by M&S Fuels Ltd in October 2018. They rebranded the forecourt back to Shell in summer 2019 and extended the forecourt shop adding a Costa Express machine in the process. As a result of the extension, an electric vehicle charging point situated around the back of the shop has been removed.