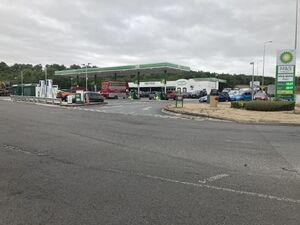 A34 at Milton Interchange
(also accessible to traffic on the A4130)

The busy Milton Interchange on the A34 has attracted a number of retail developments, including a service area on the Didcot Link Road. 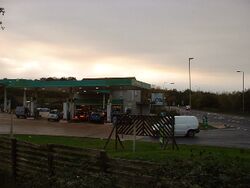 The original forecourt, pictured in 2005.

As new bypasses started to open on the A34 in the 1970s, developers looked at places where service areas could be built. Minscombe Properties proposed building here in 1972, but the local authority weren't convinced that it would be necessary. Over the following years, Vale of White Horse Council began to accept that the A34 would need a new service area, that it should be built at a junction, and that Milton Heights would be the best junction for it.

Other developers proposed building along the A34 around Drayton, while Oxfordshire County Council pushed for a service area at Abingdon.

By 1979, this section of the A34, and the roundabout, had opened, but work on the Didcot Link Road hadn't started yet. The district council signalled their support for a new petrol station to be built next to the link road, accessed by a temporary section of road. Space for a small restaurant and a toilet block would be left.

This project was delayed by two issues. Firstly, it was discovered that contractors building the A34 had illegally dumped their spoil on the site in question, which had to be cleared before work could start. Secondly, there was a dispute with the council over the precise alignment of the link road.

The service area opened in February 1985. There was a plan for an amenity building with a restaurant and a transport café, but this was never built and the land was used for HGV parking. The petrol station had a two-storey sales building. It was taken over by Mobil in around 1987, with their shop 'Mobil Mart'. They planned a restaurant, and said "at least one operator has expressed an interest in running it". A new toilet block was built in 1992.

The petrol station transferred to BP in around 2000. By 2008, it was looking very old and tired. It was demolished and replaced with something much larger.

The planned restaurant was never built, but in 1993 the first mention of a McDonald's being built was made. The long driveway leaves space for the field to the south to be developed too. There was also talk about a hotel; it was first described as Travelodge, and then opened in 1995 as Brewers Fayre's Milton Lodge. This replaced the HGV parking. The attached restaurant became Table Table, and in 2018 it transferred to Beefeater.

Minscombe Properties have sold the land the service area was built on, but continue to develop the surrounding area. In 2005 there was a plan for a second hotel. In 2008, the Didcot Link Road was upgraded, and space was left to develop the area to the north. This now has its own range of restaurants, including a Costa drive thru and a Vauxhall dealer - but it is not part of the signposted service station.

Two InstaVolt electric vehicle chargers were installed in the McDonald's car park in summer 2022, in addition to the existing bp pulse chargers on the forecourt.