A small petrol station at a traffic light junction makes up the Isle of Sheppey very own official service area. 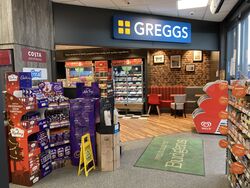 In the 1930s there was a garage on what is now the old road across the Isle of Sheppey, which is now part of the A250. By 1981, this garage was known as Sheppey Auto Garage and gained fuel facilities around this time. This became the current service station, with fuel provided by Esso throughout the 1980s.

The site was acquired by George Hammond Plc in the early 1990s, who rebranded it to Shell in 1998. It was then rebranded to BP in the 2000s. The filling station was refurbished in early 2012, gaining a larger sales building housing a SPAR store with a Subway concession. The forecourt also gained a four-bay jet wash and vac centre.

The Subway store closed in 2018, whilst the sales building rebranded to 'Welcome' in partnership with Southern Co-op in May 2019.

MFG acquired George Hammond PLC on 30 June 2021. MFG rebranded the store to Budgens and reintroduced Costa Express to the site. They then refurbished the interior, opening a new Greggs store in the former Subway space on 21 October 2021, alongside a number of new grab and go options.