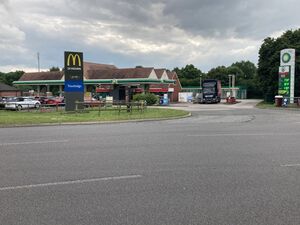 A service station near Alcester with an unusually pointy roof above the petrol station.

Short stay customer parking is provided for cars at all facilities. No HGV parking is available.

The filling station opened in 1990, before the road to the south was opened. The Alcester branch of Little ChefHistory eventually opened in early 1995 with a Coffee Stop. A Travelodge hotel also opened here around the same time.

The restaurant received an extension in 1998, which saw the Coffee Stop replaced with a Burger King franchise. The restaurant became a Little Chef Choices in 2001, where it gained Harry Ramsden's, Upper Crust and Caffè Ritazza concessions. Those were later removed.

The restaurant was one of many Little Chefs to be closed by R Capital in December 2012. It later reopened as a McDonald's.

Bridge End Ltd. were granted planning permission in August 2021 to redevelop the forecourt here, replacing the forecourt canopy and pumps including removal of the current LPG pumps, add new car and jet washes, add more car parking spaces and build a new forecourt shop which will include a Subway store. Permission has also been granted for a Costa Drive Thru store which will be situated behind the forecourt and include 6 electric vehicle charging bays.