A pub, hotel and petrol station at the Dutch House Roundabout near Prestwick Airport.

Short stay customer parking is available for cars at all facilities, with a large vehicle parking bay available next to the forecourt.

Use of the forecourt parking areas is limited to 30 minutes maximum stay from entry to exit and is strictly enforced by BP.

Parking within the Brewers Fayre and Premier Inn car parks is free for customers and hotel guests only, and you must provide your vehicle registration to the restaurant or hotel to claim this. Chargeable parking is also available between 8am and 6pm, 7 days a week at the cost of £2 for up to 3 hours and £5 for up to 10 hours. Fees can be paid via the Horizon Spaces app, using location code 5011. 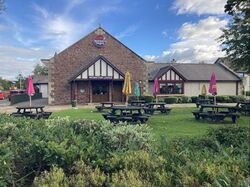 The Brewers Fayre restaurant was the victim of a major fire on 2 April 2000, which saw 50 firefighters spend more than 5 hours tackling the blaze. Following the fire, the restaurant was demolished and replaced with the building we see today, opening later in the same year.

Both the hotel and restaurant gained extensions in the early 2000s, with the hotel rebranding to Premier Inn in 2007. The forecourt sales building also gained an extension in 2008, with the site becoming a BP Connect site and gaining a M&S Simply Food store and Wild Bean Café.

2 BP Pulse electric vehicle charging points were installed here in 2020 but due to power supply issues are yet to go live.

Although 'Services' is used as a destination on the roundabout signs, Monkton is not formally signed from the A77. It does have some signage on the A78, which weirdly puts an emphasis on its "business facilities".