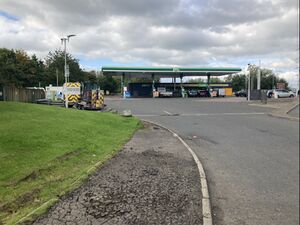 A couple of facilities at the Bellfield Interchange, as the A77 skirts around Kilmarnock. 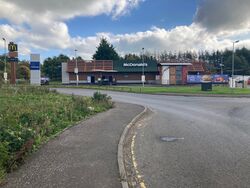 The McDonald's restaurant, built on the site of the former Little Chef restaurant.

The site was first identified by Kelly's Kitchen, who had hoped to open a restaurant in Summer 1990. The brand was acquired by Trusthouse Forte, who built it as a Little ChefHistory and Travelodge, alongside a forecourt operated by Q8. It was built with spacious surroundings, probably to make use of all the available land, with the facilities based around a roundabout in the centre of the site.

The Little Chef closed in January 2012, being demolished shortly after to make way for a new McDonald's restaurant. There had been a plan to try to salvage the old building, but it didn't happen.

The filling station became a BP site with a SPAR store in the mid-2000s. The car wash was removed to enable an extension to be added to the sales building to house a new Subway store at the end of 2015. The position was moved from the right of the pumps, to in front.

Current forecourt owners MFG later rebranded the store to Londis in 2020, before refurbishing the store in June 2022, when they introduced their new grab and go range.

In the 1970s there was another Little ChefHistory on the A71 a few miles to the east of here, at Galston. There was also a branch on the A77 to the south at Symington, which closed in 2004.