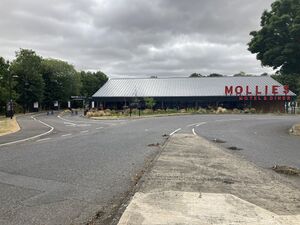 The forecourt at Buckland was recently expanded to include a new restaurant and hotel. 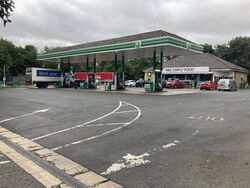 The service area was built on the site of a bungalow called Cranford, which was attached to some farming sheds. The farm was abandoned in the 1960s, and the land was put up for sale.

The first plan for a service station, from a local developer, was rejected in 1978. At the time it was known as Cranford services. A second plan was rejected in 1985, with the council arguing the road was too fast for this sort of development, and that the road wasn't busy enough to warrant it.

The council were eventually convinced that the opening of new bypasses on the A420 meant the road would need a new service area, but they preferred a site at the roundabout at Kingston Bagpuize. An inquiry considered this and Faringdon.

Planning permission for Buckland was chased up by the family who own Barton Stacey services, and the land was then sold to Trusthouse Forte. Until then Forte had been looking to turn the Plough Inn on the A420 near Little Coxwell into a Little Chef, but preferred the new-build site at Buckland. Planning permission was granted for a Little Chef and a Mobil petrol station with their Mobil Mart shop in 1989. Space was left for a Travelodge.

The restaurant was delayed and opened in 1993 with a small, stone-cladded building. It was expected to gain a Coffee Stop. Repeated efforts to build a hotel were blocked.

The filling station later changed to BP branding in 1997 following the merger of Mobil and BP. BP redeveloped the forecourt in 2016 introducing a M&S Simply Food store to the site.

The Little Chef restaurant closed in February 2012, citing low trade. The building went onto house Awesome Diner, and in 2014, Chariots & Cherry Pie but this closed the following November leaving the building empty again. The site was purchased in early 2018 by Soho House who demolished the former restaurant and reopened it in January 2019 with a new drive-thru restaurant, general store and hotel branded 'Mollie's'.

Mollie's announced that it wants to expand to 100 branches by 2031, in a mixture of roadside and city centre locations. It classes itself as an "affordable hotel and diner" chain.

Six GRIDSERVE Electric Highway charging points were added to the car park in 2022.