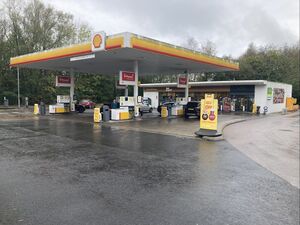 Also known as Blackdown services or Ashdown Forest services, this is a small site at the Black Down Roundabout.

When the Maresfield Bypass was built, provision was made for a service area here. The finished road had an embankment provided for the slip roads.

The Little Chef, which looked sunk down away from the road, used their newest generation of prefabricated building design, with what they called a "traditional look" and a fast construction time. It quickly gained a Burger King Drive Thru, but the whole building closed in 2010. There was a plan for it to be converted to a KFC, but it re-opened two years later as a McDonald's Drive Thru instead.

Since 2012 the petrol station has been branded Shell. The filling station reopened on 22 February 2019 after a major refurbishment, which saw the shop branded Little Waitrose & Partners. A Shell Recharge electric vehicle charging bay was added to the front of the forecourt in 2021.