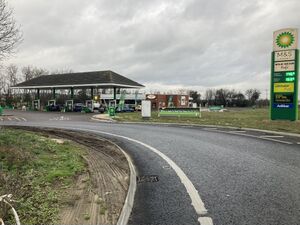 A13 between the M25 and Basildon, Essex

A pair of petrol stations on the A13 near Orsett.

No HGV parking is available on either side. 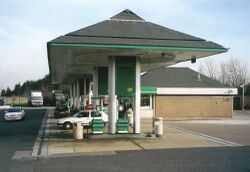 Plans for a pair of service areas here date back to January 1986 when Mobil submitted plans for a set of toilets to be built on either side of the roads. In July 1986, the toilets were joined by a pair of filling stations and a restaurant on each side. The forecourts opening in 1988 and were known as Orsett Cock services.

The plans for a restaurant on each side persisted for some time. In 1989, Kelly's Kitchen planned to open a pair of restaurants here but were unable to secure planning permission. Forte submitted plans to add a Little Chef to each side in 1992, but the westbound McDonald's was also proposed and opened in 1994. A Little ChefHistory was later able to open on the eastbound side in 1995.

When Granada acquired Little Chef, they planned to add a 40-bed Travelodge, but their plans were refused.

Following the merger of BP and Mobil, the filling stations were rebranded to BP in around 1999. In 2001, both filling stations were planned to receive site refurbishments introducing new sales buildings, canopies, car washes and parking bays to each site however these plans were refused. Following another refusal, the westbound refurbishment was finally granted planning permission in 2005.

The Little Chef closed in 2005. Following the closure, BP were granted planning permission to demolish the former restaurant and use the land for a lorry park, however this didn't happen.

The westbound filling station became a BP Connect site in 2008, receiving a M&S Simply Food store and Wild Bean Café in the process. In 2010, the eastbound filling station received another site refurbishment which saw the sales building relocate for the centre of the site to the east of the site. As part of the refurbishment, the site also became one of BP's BP Connect sites, receiving a M&S Simply Food store and a Wild Bean Café too.

In 2011, the former Little Chef building was leased by Thurrock Council to Sigma Studies, who use the building as a transport centre. They purchased the building from the local authority in 2016.

The westbound BP forecourt is currently undergoing a refurbishment and is expected to reopen in Spring 2023 with two new BP Pulse electric vehicle charging points.