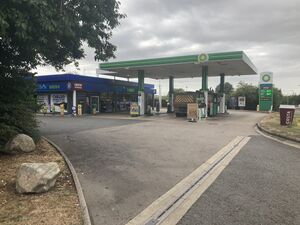 A45 westbound at Wellingborough

A petrol station and motorhome store on the westbound A45. 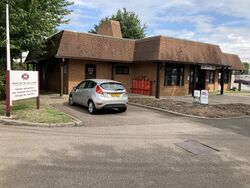 Plans for a service area here date back to 1964 where a filling station and vehicle repairs garage was proposed. An auto-grill was also planned in 1965 but was refused. The filling station and garage were eventually built by a local company Hamblin Group towards the end of the 1960s and the site was known locally as 'Seamarks Garage'.

Hamblin Group were the first to be granted outline planning permission for a 'motorway type service station' to be built on the site in 1984. A year later, the site was put up for sale through Lawlor Land Co. who submitted plans for the redevelopment of the filling station as well as the introduction of a restaurant to the site to replace the garage.

Petrofina purchased the site in 1986 and refurbished the filling station, teaming up with Kelly's Kitchen to add a restaurant in March 1987. There were plans to add a 40-bed hotel in 1988.

The Little Chef closed in 2001 and became home to the White Arches Motorhomes in 2003.

Following the merger of Snax 24 with Rontec in 2015, the filling station shop gained Shop'N Drive branding.