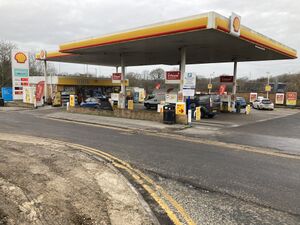 Signposted from the road? A12 westbound only

For the service area near Shenfield, see Brentwood.

South Weald service station is positioned in the corner of the Brook Street Interchange. It's only signed from the A12 westbound, but it is fully accessible from the A12 and the M25.

Parking and use of the forecourt is limited to 15 minutes maximum stay and is strictly enforced by Euro Car Parks. 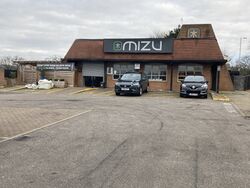 The former Little Chef, and before that Kelly's Kitchen, building is now home to the Noodle Bar.

A garage has been positioned here since the 1960s, and is positioned on what was the main A12, before the Brentwood Bypass was built. It was a tall service building, and there was a refuelling area facing the road.

Next door to this was a house, which was demolished and replaced by Norfolk House in 1990, opening as a Kelly's Kitchen with their typical building style, including a low roof and a chimney. Fina took over the forecourt at the same time, as part of a project which had also hoped to add a 49-bed hotel in the space between the restaurant and the A12 bypass. That aspect was unable to secure planning permission.

The restaurant became the Brentwood branch of Little Chef in the following year. Forte had an interest in the area, as in 1987 they had tried and failed to build a Little Chef on the main A12, about a mile to the north-east.

The restaurant gained a Burger King in 1996. That and the Little Chef restaurant closed in around 2005 and became Elvis' Diner, before becoming Mizu Noodle Bar in late 2007. A snack bar is also now often situated in its car park.

The filling station became a Total, with a Bonjour store. Total sold it to Shell in 2012, following their nationwide shutdown. This now provides the main facility for motorists.

The rest of the service road, leading towards the roundabout, is used by vehicles as a parking area, even though most of the street is restricted and the vehicles mainly park on the grass verge. A house which used to be positioned next to the roundabout was demolished in 2015 and, as is often the case with forgotten streets like these, the area is just collecting litter.

Shell are seeking to rebuild their forecourt, providing four sheltered electric vehicle charging points in the process. This will see it expand over the abandoned land next door.

A little further along Brook Street is a former Forte Posthouse which was built in 1991 when Forte took over Kelly's Kitchen. This is now a Holiday Inn.