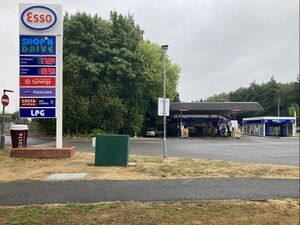 Glinton looks like any other service station positioned next to a relatively quiet road, but strictly speaking it is not officially signposted as one even though it has been trying desperately to become more significant. 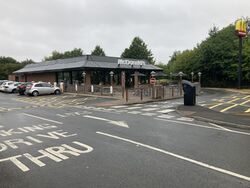 The McDonald's was added at the back of the site.

The Glinton Bypass opened in 1989, but before it did developers were already looking at how they could service it.

The first proposals came from Norfolk House (who did the design work for Kelly's Kitchen) and Petrofina in 1988 who came up with several designs for a service area here. The first had traffic flowing clockwise, turning into a large petrol station. At the far end was a C-shaped building with a restaurant and toilets.

The second option had traffic flowing anti-clockwise (as did all subsequent proposals), with the entrance taking traffic around the back of a large restaurant. A third option, dated 1989, had a hotel at the back and a small, square restaurant with a children's play area to the south.

A final option, dated 1990, had the petrol station in a very similar place to today's, with a large restaurant next to the road and a hotel and lorry park to the south. The design of this restaurant was very clearly supposed to be Kelly's Kitchen, as it had the same chimney and these were always built by Norfolk House with a Fina forecourt. The hotel may have been intended for their sister company, Highway Lodge. The others are less clear: the third option would almost-certainly have been a Little Chef, perhaps with the intention of them buying it. Despite the development being permitted, Norfolk House pulled out in 1991, most likely because Kelly's Kitchen had been sold - but Fina appear to have built the forecourt a few years later.

Another developer took on the idea of adding a restaurant and a lodge in 1993, and received planning permission. This was renewed in 1996.

Damon's Restaurant - owners of the restaurant at Doddington - planned a restaurant, bar and hotel here in 1998. It would have had the same unique, circular shape for the restaurant with a hotel consisting of three buildings arranged to form a triangle.

Towards the end of the millennium saw Lakeland Estates move towards building a McDonald's and a hotel here in 1999. The hotel would have had its own dining room. These plans were renewed in 2001 and the McDonald's opened shortly after. Meanwhile, Lakeland applied to build the motel again in 2004, and then they proposed a larger hotel in 2006, which was refused.

The patch of land which was originally reserved for the hotel back in 1989 is still undeveloped today. In 2015, Lakeland Estates placed a sign on it advertising the land as a hotel development opportunity.

The forecourt changed from Fina to Total in the early 2000s, and was later acquired by Rontec in late 2012 following Total's nationwide shutdown. Rontec rebranded the site to Esso and added their Shop'N Drive store to the forecourt.