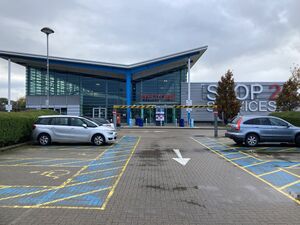 The last service station in England: Folkestone is located just minutes from the Eurotunnel and not much further from the Port of Dover. It calls itself the 'Port Early Arrival Facility', meaning that anyone early for their ship or a train can stop by and rest before heading onwards.

First 2 hours free for all vehicles, after which cars must pay £9, caravans and motorhomes must pay £20, and HGVs must pay £23 which includes a £5 food voucher.

Prices are paid using the self-service pay points located throughout the amenity building.

The fees are strictly enforced by Stop 24 and are monitored by ANPR cameras. 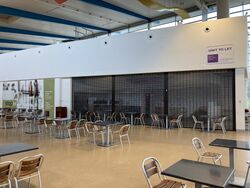 One of a number of empty units available to let in the amenity building.

Folkestone is the UK's most easterly motorway service area, but Exeter is more southern. As Folkestone is at the first exit after the Channel Tunnel, the series of roundabouts within the service area forms the first challenge for drivers of foreign-registered vehicles.

Folkestone is a very unusual motorway service area precisely because it is the only one in England not to have any sister sites elsewhere in the country. It consists of a large building which is managed like a shopping centre, with individual units leased out to interested firms. For many years it was characterised by its high turnover of retail units, leading to it being labelled "a commercial failure".

Planning permission was granted to install a temporary two-storey, 80-bed Snoozebox hotel here to the south of the amenity building in 2017, made from old shipping containers. A separate superseding planning application was accepted in September 2020 which will see the Snoozebox hotel increase in capacity to include 98 bedrooms over three stories, and in place permanently. The landowner says the hotel will be branded "Best Western or similar".

American coffee giants Gloria Jean's had intended to open a store here to replace the West Cornwall Food Co. unit, but this is no longer the case.