How are motorway services named? 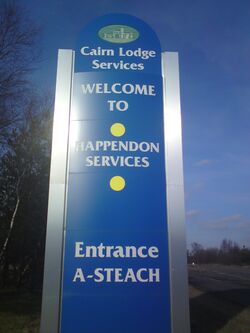 Service areas are supposed to use the names of places, not branding.

Today, service stations are developed by the private sector who can use whatever name they like. Generally, developers like to use names that refer to well-known places, for reasons that are explained further down.

There is a rule that the name which is used on road signs must be a "geographical" name, but that's a very vague rule which has allowed Cairn Lodge, The Buck and Family Farm to be used. Motorway service areas must have an official geographical name provided, but A-road service areas can remain anonymous if they prefer.

There are two examples of services which were promoted under a brand name and then changed to a specific one: Gloucestershire Gateway became Gloucester in 2014, and Stop 24 became Folkestone in about 2010. This suggests that the vague "geographical" rule may have some weight.

The oddest service area name in the UK is probably Pont Abraham. It is named after a bridge that no longer exists, and that bridge was named only in Welsh.

How Names Have Changed

For the first 25 years, motorway service areas were planned by the government. The Ministry of Transport (and their many successors) would give each service area a very precise name, to identify it from other locations they had been considering. That name would then be written in the contract.

As they owned the land, the Ministry had the final say in what went on the road signs, although they were willing to discuss any name concerns with the operator and the local authority. The contract for 'Cutsey services' opened as Taunton Deane, and 'Sandy Gate services' opened as Exeter.

This relationship changed in 1992. Motorway service areas were able to own their own land, in exchange for paying for new road signs on the motorway. The service areas soon made one thing clear: they wanted those signs to have the names of cities, not obscure villages.

A few names were changed early on, mostly by Pavilion. Name changes became a big news story in June 1996, when it was reported that as many as one-in-five motorway service areas could be about to change their name. Granada and Roadchef were both quoted saying they were unhappy with the historic names they had inherited.

One reason for this preference was that it made it easier to promote the business, especially the hotel. A new name was also an opportunity to shake-off a bad reputation. However, according to one Granada insider, the main benefit of using a less precise name was that it allowed them to claim a larger corner of the motorway network. For example, if Trowell services became "Nottingham services", it could then be expanded on the basis that it was the only service area needed in the Nottingham area.

The operators argued that using more vague city names was doing the public a favour. In a world where motorists were still expected to memorise the route they would be taking, using the names of famous landmarks made it easier for drivers to work out where on the route they would be stopping. The AA supported this view, and welcomed the name changes. It was also the logic used by the budget hotel industry, who knew city names looked better on posters.

The public reaction was somewhat different. Motorway service areas are 'nowhere places' which have nothing in common with their surrounding environment. Many drivers found that intriguing, and the discovery of these otherwise unknown village names was often said to be part of a joy of a long car journey.

Newspaper columnists, who usually do a lot of travelling, were particularly upset by the changes. When Hilton Park became Birmingham North, the Sunday Telegraph spoke of "mundane new titles", Burton Mail said the changes were the work of "some anonymous minicrat" and The Observer called them "meddling bureaucrats".

Granada had nine new names approved, but only two changes went ahead as planned. No reason was given for the change of heart, but the press coverage was likely to be a factor. 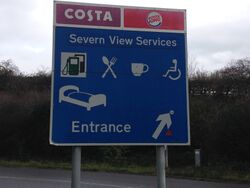 The more quaint name 'Severn View' has been stuck over its old name.

At the same time as most motorway service areas were thinking big, many new sites were going for a new style of obscure name.

By the 1990s, motorway service areas were trying to give visitors a relaxing impression as soon as they arrived. As part of the new focus on pleasant greenery, new sites opened with names like Cherwell Valley, Birchanger Green and Hopwood Park. Aust was changed to the impressive-sounding Severn View. This policy was especially useful for service areas that had no nearby town to be named after.

In the 2010s those cumbersome names started to be dropped, with Gretna Green and Donington Park losing their suffixes.

In March 2020, Leeds Skelton Lake became the only motorway service area to have two names in its official title. Skelton Lake is in Leeds.

Motorway service areas have their name advertised on road signs that are read by hundreds of thousands of passing motorists every day, coming from all over the country. For this reason, the chosen name really does matter.

Many residents have also mocked service areas that are nowhere near the place they are named after. A name like "Chester services" isn't especially helpful if you live in Chester, which is why locals tend to prefer a local nickname. 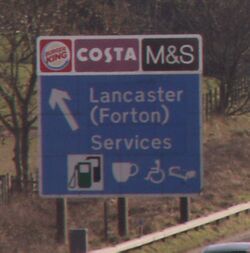 The sign for Forton with "Lancaster (Forton)" stuck over it, following the June 1996 renaming.

Each individual brand will want to refer to their branch by a name that is unique to their business. This means one particular service area may be promoted under several different names. In particular, petrol stations that have been there a long time may still use the name of a local landmark that is no longer relevant, while hotels will want to use the name of a major landmark.

Locals to the area may prefer to use a local nickname, and if you're looking through the history then there is another name to look out for: during development, service areas are often known by the farm on which it is going to be built on.

Naming after a major city can cause complications when new service areas open. There are at least three services which want to be known as Doncaster, while Welcome Break's Peartree is closer to Oxford than their own Oxford services. Signed service areas will try to make each name unique, while each individual operator will want to avoid any duplication within their own estate.

In 2012, the Remote Distance Sign was changed to use service area names rather than operator names. This can cause confusion when names of far-away cities are used.

When a service station has two buildings on either side of the road, most staff know the buildings by where they are, not where the road goes. Thus Frankley northbound is known internally as "Frankley West" because it is to the west of the M5, even though the road is going north.

This becomes especially confusing when a road turns. Thanks to a bend in the M6, at Corley the building to the north of the road ("Corley North") serves the M6 southbound. Winchester is another example, where the western half ("Winchester West") serves the side of the M3 that will take you east. Keele is an even more pedantic example.

The following motorway service areas have had their official name changed over the years. This only shows the names that were used on road signs, so it excludes names that were only used during planning.

The name changes have generally happened in a few waves: firstly Pavilion going for more fashionable names in around 1993, then Granada using big city names in 1996, and more recently the change of road signs in 2012 allowed a few more service areas to shorten their name.

In the case of Granada, there were many alternative names that they used on leaflets, and at least nine name changes that they had approved. This list only shows the ones that are likely to have happened.

As most A-road service areas aren't named on road signs, there is often no consensus on what they are called, making it difficult to trace any changes. There are some examples though, for example what Shell currently call Buckingham services was called 'Mount Pleasant' by Fina. Similarly, what's widely known as 'Boreham services' has an old sign calling it Chelmsford. 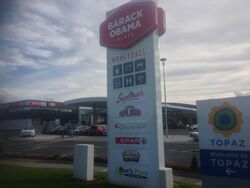 Official (online) services in Ireland are planned by the government, and use local names coupled with the motorway number.

Unofficial (offline) services are named by developers, and usually refer to larger settlements like Wicklow. The road signs never use these names, except on the M11 where a comparison with other services is required. In that case the signs refuse to use the Wicklow name, and call it Coyne's Cross instead.

In particular, Supermac's like to use branded names. It remains to be seen what the road signs will make of Barack Obama Plaza.