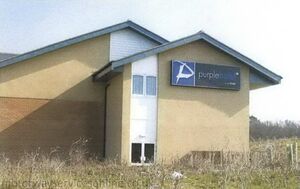 Only one photo tagged with Purple Hotel at services. If you have one, why not upload it?
Official Website:
www.purplehotels.co.uk

Purple Hotel was a short-lived hotel chain owned by The Real Hotels Company. On the motorways it could be found at Extra services.

After The Real Hotels Company ended their relationship with Choice Hotels, they were no longer allowed to use the Sleep Inn name for their 11 hotels. To replace the Sleep Inn name they created Purple Hotel: a budget brand aiming to compete with market leaders like Premier Travel Inn by matching their prices but beating their quality. The owners called it "no frills chic". Lavazza coffee was served in the lobbies.

The first Purple Hotel opened at Panners in December 2007.

The financial crisis hurt the hotel industry, but especially the already-weakened Real Hotels Company. In 21 January 2009 it fell into administration, causing their hotels to close in March 2009.

Of the 11 Purple Hotels, 4 of them were at official service areas. These were: