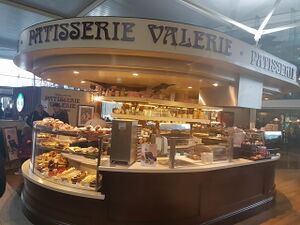 Patisserie Valerie is a café chain who serve cakes and patisseries. They have several outlets at shopping centres and railway stations across the UK and in 2014 it opened a number of stores in Extra service areas. Beaconsfield was the first to open.

On 22 January 2019 the firm fell into administration. It claimed that it intended to keep a number of profitable stores open, but all four cafes at Extra sites were closed immediately. The firm had been struggling all winter after discovering an accounting fraud.

Patisserie Valerie used to be found at some Extra service areas. They were: