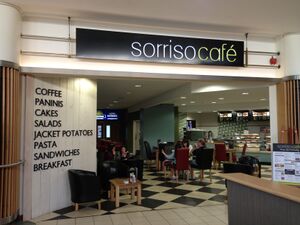 Only one photo tagged with Sorriso Cafe at services. If you have one, why not upload it?
Facebook Page
Twitter: @SorrisoCafes

Sorriso Cafe was a café which opened units at two services in 2012, including one at the new Cobham services. It sold coffee and light meals.

Away from the motorways, branches were at Romford, Falkirk, and Hemel Hempstead.

Sorriso Cafe used to be found at the following services: