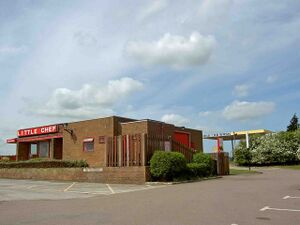 Swavesey services was a service area on the A14 near Bar Hill. While the road and the facilities have changed somewhat, the place is at least still in use.

In its heyday, it operated as the eastbound partner to Lolworth. It was positioned on the A604 and it had a Little Chef restaurant, Travelodge hotel and a Texaco forecourt which was widely known as the 'Six O Four' (as in, "A604").

The A604 became part of the new cross-country A14 route in 1994. At the same time, it was announced that the A14 would itself be replaced by a new motorway, which was unlikely to make space for a service area so small. As a result, Cambridge services was opened in 2000, positioned immediately prior to Swavesey, and providing a much larger range of facilities. This took a lot of Swavesey's trade, and left Swavesey with very little space to signpost itself.

On a trivial yet interesting note, Swavesey services was positioned almost precisely on the Meridian line. This was another distinction that it lost to Cambridge.

The forecourt was the first to close, and it became a hand car wash and a conservatory retailer - an unusual outcome for a place which was still accessed directly from the very busy A14. The Little Chef closed in 2010, and after being abandoned for a few years, it reopened as JK's fish and chip shop. The conservatory retailer changed to a tyre retailer.

The fish and chip shop closed in 2015, and in 2016 became an independent American diner called Herbie's Diner]. The building has had a significant makeover to suit the new American theme, and serves a wide menu of burgers and milkshakes.

Work finally began on the A14 upgrade in 2017. Under the completed layout, the old A14 eastbound carriageway became a new local road, the A1307. Access to what had been Swavesey services was maintained with the new road layout, but the A1307 doesn't carry anywhere near as much traffic as the old A14 brought to its door.

Having said that, the new road layout does make it easier for local road users to visit, and as a result Herbie's is still a well-known landmark that gets used as a meeting point.