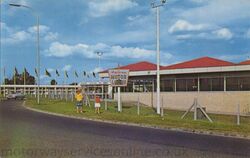 Peartree can trace its history back to the Fortes Motor Lodge Oxford, the upmarket name Fortes gave to the grand service station when it opened on 29 June 1964. It remained with them until it was transferred to Granada in 1996.

When it opened it had an Autogrill restaurant with a charcoal grill and a 24-hour snack bar. The walls down to the basement toilets were lined with carpet. 350 parking spaces were included. The building, which was built in the same style as the Autogrill at Barnsdale Bar, was positioned to be visible from the old A34.

Although at the time there were no motorways near here, this was still the junction of several major roads, and Fortes wanted to introduce their facilities without the hassle and regulations encountered when running a motorway service area.

The motel itself was called Excelsior Motor Lodge. It had a small outdoor swimming pool and a covered, drive-through reception area on the entry road. The rooms were arranged in one long row, to allow for parking close by.

City of Oxford Motor Services used the car park beside the hotel as the terminus of a new bus route. Launching in November 1964, they encouraged commuters to park in the empty hotel car park during the day, in doing so creating what's believed to be the world's first park and ride bus service. The experiment ran until August 1965, after which the concept was deemed a success and a formal park and ride system was created.

Away from the hotel, there was a small petrol station in the middle of the site, and a large parking area including spaces for coaches and HGVs at the back. 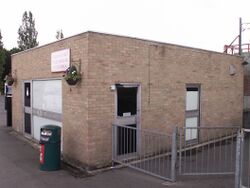 Several changes were made to the services, introducing a carvery, and then the country's first Granary restaurant. The hotel became the Oxford Motor Lodge, and the service area was known as Oxford. The swimming pool was filled in.

In November 1979, HGVs were banned from the service area. Forte stated that this was because the parking area was too small and weak, and the entrance too tight. The parking areas were formally marked up and the area at the back became for coaches only. Forte had an unhappy relationship with HGV drivers at many of their sites, as there was more money to be made from families.

In 1981, the former reception building became a Little ChefHistory. It was the first Little Chef to open at a comprehensive service area like this. The building was painted bright white and red, and maintained its steep roof. The Little Chef was actually some distance from the car park, and had a zebra crossing to allow customers to cross the main road; it was better positioned for hotel customers.

In 1988, Forte applied their newly-acquired Welcome Break branding to the service area. The hotel was branded TraveLodge in the 1980s, and then renamed Welcome Lodge. A secondary takeaway building served coffee from the car park.

When Granada purchased Fortes, they were soon forced to sell all of Welcome Break's motorway services - but Peartree was left out of that because it wasn't on a motorway.

The Welcome Break branding had to be removed. Granada moved the Little Chef in to the main building, with a coffee shop, a Granada Shop, game arcade, and a Burger King. The old Little Chef was demolished, and the hotel became the Oxford Lodge.

With the opening of the Peartree park and ride site down the road (which came much later than the earlier trial), and the upgraded roundabout being named 'Peartree Roundabout', the facilities became known as Oxford Peartree. Some Granada posters called it just "Oxford" as recently as 1996.

Throughout the 1990s there was a plan to demolish and rebuild the main building, but this didn't happen. Instead, just the external areas were refreshed.

The petrol station and its tiny sales shop were demolished and replaced by a larger Shell forecourt, positioned further back. This created space for the coach park to be moved from the back to the front. A more formal road layout was introduced, with an access road running all around the site, instead of the less organised arrangement which had existed previously.

Granada made arrangements for the hotel to be demolished and replaced by two new buildings. The existing lodge was 40 years old and, having opened as one of the first of its kind, now looked very outdated and used its space very inefficiently.

The first of the two new hotels was going to be a Posthouse - the first to open for 20 years - and the second was a Travelodge. Together the two would cater for very different markets. By the time they actually opened, Granada had passed all its service areas on to Compass, and Compass had sold the hotel chains on. The Posthouse actually opened as a Holiday Inn, and both this and the Travelodge were operated by their new respective owners.

Under Compass, the restaurant became their first Little Chef Choices, where it gained an Upper Crust counter and a joint Little Chef/Harry Ramsden's/Caffè Ritazza menu. This was removed. The game arcade then became a Coffee Tempo!.

As Little Chef was itself sold on several times, it became a small business that was responsible for a large site. Inside and especially outside there was evidence of poor upkeep all around. Even so, Little Chef said they liked the branch, and claimed they were disappointed when their lease expired and they were denied the opportunity to renew it. The landlord was believed to be Merton College.

At the time, the entrance led to a corridor on the far right on the building. The dining area was on the left, with the shop straight ahead.

Welcome Break took over the building in April 2010 and completely stripped it out, with the new facilities opening on 9 July 2010. This meant it had now been owned by Welcome Break on two separate occasions. Their takeover extended to the main facilities only, meaning they do not operate the hotels.

Under Welcome Break, a new entrance was created which led to a corridor through the middle of the building. Roughly, the old lobby area became Starbucks, the old shop became KFC, and the old restaurant area became Waitrose, although the new layout looked nothing like the old one. Coffee Primo had been expected to open here, but Starbucks was selected instead.