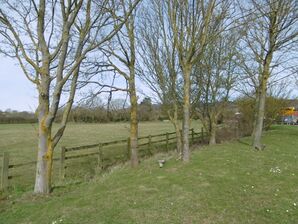 Only one photo tagged with Wrotham services. If you have one, why not upload it?

Wrotham Truckstop is a new proposal for a truckstop at M26 J2A, in Kent.

The proposal entered the consultation phase in 2021, and is now with Tonbridge & Melling Borough Council.

The facility would be built on green belt land close to both the M25 and the M20. A new roundabout would be provided on the A20, leading to a large forecourt, attached to a facilities building. A secured parking area for 195 HGVs would be provided further round.

Details on what would be provided in the amenity building haven't yet been made public, but it's likely to be similar to the recent development at Rothwell, with limited branded facilities but a similar provision to a service area.

Moto say that they have been examining numerous possible locations in Kent, with Kent County Council themselves having spent a lot of time researching HGV parking capacity in their county. They ruled out proposing a full motorway service area here because there is already suitable provision for cars, with a small number of car parking spaces here being intended for staff.

The subject of HGV parking in Kent has become especially tense and pertinent since Brexit changed the flow of trade through Dover - the M26 here is one of the appointed stacking points in the event of port disruption. In fact, right across the UK, this would be the first 'motorway truckstop' to be built since such a concept was formally defined in 2008, showing just how slowly things have moved.

As often happens, a large number of objections have been received from local residents, many of whom have commented on the noise and traffic associated with a lorry park.

As the regulations for truckstops are different to those for full service areas, a successful truckstop here could qualify for signage from M20 J2 and J3, too.

The A20 London Road is the historic route to the coast, and has always been an important transport corridor.

Even once the M26 was eventually completed, its junction with the A20 was still a popular stopping point. A large lay-by (next to where Moto's new roundabout would be built) received heavy use, but was closed in 2020 as part of the Brexit contingency plan. The well-known Oakdene Café was positioned opposite and catered for a lot of HGVs and bikers, but this closed in February 2021 and is expected to be converted into industrial units.

Not long after the M26 was completed, Esso proposed building a service area in this very spot. They specifically said it wasn't trying to be a full motorway service area, but would have a restaurant building, car parking spaces and a forecourt. This was refused planning permission in 1992, with the appeal saying it would be inappropriate to build it on green belt land and an intrusion on the countryside.