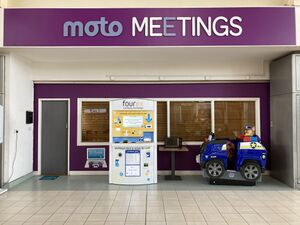 Moto Meetings was the apt name provided for Moto's Meeting rooms. Rooms were able to be booked in advance online.

Following the coronavirus pandemic in 2020, Moto decided to close their dedicated meeting spaces to make way for new brands. Moto are now offering soundproof workpods in their seating areas for casual working instead, which were first trialled at their newest site Rugby. Moto also teamed up with Go Pod in late 2021 to offer private, bookable workpods at selected sites.

The Moto Meetings concept was created by their predecessor, Granada, in partnership with BT.

It was called Workspace, and was launched at Heston in 2000. It was designed by BDG McColl and had facilities including lounges, video players, projectors, a buffet, hot desks, secretarial support, meeting rooms, changing rooms and power showers. It was part of Granada's effort to secure more custom from commuters and business travellers.

More Workspaces opened along the M4, which would all go on to become Moto Meetings. More sites were planned.

The Workspaces also had a spin-off, called 'Workspace Satellite', which offered similar facilities in at least eight Travelodges on main roads. These were promoted by Little Chef, who were a partner of both Granada and Travelodge at the time, and the satellites were removed when Travelodge was sold.

The workspaces were initially criticised by the Department for Transport, who felt that they were not a core facility.

Under Moto, some more units opened, including one in their latest acquisition, Leeming Bar. These meeting rooms were all booked via their Super Control management system.

Moto Meetings used to be found at the following service areas: