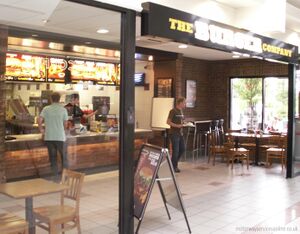 The Burger Company was Roadchef's attempt at an own-brand fast food outlet.

It replaced Wimpy which had been at most of their services for over 10 years previously. They used The Burger Company as a holding name for sites which were soon to gain a McDonald's franchise. McDonald's required considerable investment before a franchise could be opened, whereas The Burger Company, being Roadchef's own creation, could be placed in any Roadchef.

This was the first time in a long time that an operator had ever tried to tackle the fast food market with their own creation. Comment was made at the time that The Burger Company sounded like it was a dig at Burger King, but it was just a deliberately bland name.

In the six years that The Burger Company was operating, Motorway Services Online received 64 complaints about it, meaning it was probably the most complained about motorway brand at the time. Almost every single complaint mentioned the quality of the food.

The Burger Company used to be found at the following service areas: