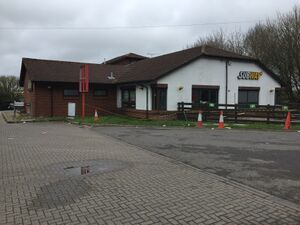 A31 at Bere Regis

The former home of the Bere Regis Happy Eater and Little Chef; the site was redeveloped by EG Group in 2022.

Short stay parking is provided for cars only. No HGV parking is available. 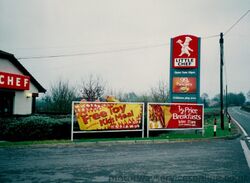 Plans for a filling station and a restaurant here were first proposed in 1981. The filling station opened first, and a Happy Eater later joined it in 1985. This became the Bere Regis branch of Little ChefHistory in 1996, which gained a Subway franchise in 2014.

Throughout the 2000s, the filling station was branded Total. In the early 2010s, this was changed to BP.

Following the loss of the rights to the Little Chef brand name, Euro Garages converted the Little Chef to EG Diner in January 2018. The restaurant closed in summer of 2018 with no plans to replace it.

Following the closure of the restaurant, the filling station followed closing in late 2018. The Subway then closed on 12 March 2019, leaving the site abandoned, and the approach signs to the site were removed. The empty forecourt was used by a snack bar during the COVID-19 lockdown, during which it was branded "food to go".

Work to redevelop the service area began in November 2021. The former Little Chef was demolished and replaced by a new forecourt sales building, branded as an ASDA On the Move store, which opened on 2 December 2022. The old sales building was to be turned into a drive thru Starbucks, but before it was built, EG Group changed the plan to make it a LEON Drive Thru - the first on the major road network. This is expected to open in December 2022.

The Ordnance Survey continued to show Red Post as an active service area, named 'Bere Regis', throughout its closure. The road signs haven't been reinstated since the place closed.