The biggest motorway service areas will have at least two shops: the first is a newsagent-style, usually branded WHSmith, while the second is a small supermarket or large grocery store. The latter is a newer and more profitable development.

Sometimes there will be some more, much smaller, shops, like Fonebitz or Leaf Gifts. There will also be a shop attached to the petrol station.

The shops are usually operated by the motorway service area operator, under a franchise agreement. Complaints and business enquiries should go directly to the operator. 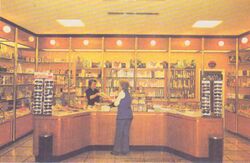 The Ministry of Transport strictly regulated both the size of motorway shops, and what they could sell. Visitors could expect cigarettes, confectionery, maps, magazines, newspapers, books, records, cassettes, toys, pens, sunglasses, batteries, tissues, toothpaste, sanitary towels, medicine, cold drinks, ice cream and biscuits - but nothing else.

The reason for the Ministry's concern was that motorway services were built on land which had been purchased using a Compulsory Purchase Order, on the basis that they were providing a vital facility. If it turned out that these places weren't just providing vital facilities but also profitable nice-to-haves, landowners could argue that they should have been offered more money for the land or that their land shouldn't have been sold at all. 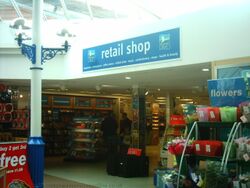 An example of generic branding, before WHSmith came in, pictured in 2005.

The government relented in the late 1970s, and allowed service areas to sell almost anything, "apart from items which a purchaser would normally make a special journey to buy".

In 1998 a 5000 square foot (464 square metre) limit was placed on shopping areas. Despite this, Granada decided to market their services as "mini shopping centres", inviting a number of High Street brands to encourage people to spend money at their sites. Granada tried to argue that the floorspace limit could be doubled at services with two sides (this was not necessarily true), and that the limit was only a guide and could be breached.

Other operators would introduce one or two lesser-known brand names, but all would maintain a generic newsagents with a generic name like Shop.

In 2008 the size limit rose slightly to 500 square metres (5382 square foot). By now, the various shopping names had been ditched in favour of a supermarket-style grocery store. Almost all of the newsagents were branded WHSmith. An additional 50 square metres was permitted for tourist information centres, although few were provided.

In 2013, as with most regulations, the size limit was totally removed. There is now only a brief reminder that service areas should prioritise the needs of the travelling public, with an implied invitation that large new shopping areas could now be built.

A survey in 2006 established that approximately 40% of visitors were looking in the shops at service stations, which was higher than you might have expected.

Contrary to popular belief, there is no ban on any service area shop selling alcohol. Licences are issued on a case-by-case basis.

Many new service areas are being developed as large petrol stations. Over time, petrol station sales shops have grown from providing just a few motoring basics to selling food, books and toiletries. This will sometimes be done with the help of a convenience store brand, such as Centra, Spar or Co-op.

Prior to the 2013 de-regulation, the wording was that such shops on motorways should be "limited in scale and genuinely ancillary to the sale of fuel".

In local areas, it's common for the petrol station sales shop to double-up as a convenience store for neighbours, such as a Londis or, more recently, Tesco Express.

As early as the 1960s, there was pressure to provide gambling machines at motorway service areas, to give lorry drivers something to do during their rest breaks. These are different to the merchandisers and other gimmicks that are often placed in lobbies, and aimed primarily at children, although both were resisted by the government at the time.

The 1994 regulations said that motorway game arcades must be no more than 1000 square foot (93 square metres), subject to local licensing requirements. This was rounded up to 100 square metres (1076 square foot) in 2008. This limit was removed in 2013, like most others. There have never been any special regulations for A-road service areas.

Although game arcades often look quiet, they tend to be very profitable and popular with HGV drivers.