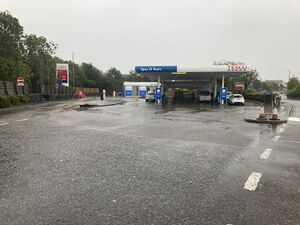 22 more photos in the gallery
Location:

They don't come much stranger than Ferrymuir. It was once positioned on the main A8000, but successive changes to the road layout mean it's now over a mile from the nearest main road and is referred to merely as "alternative services".

Short stay customer parking is provided at all facilities, subject to restrictions. 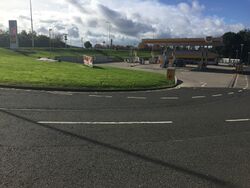 The Shell garage at Forth Road Bridge services.

Ferrymuir services was built on the A8000 Ferry Muir Road, which at the time was the main road to Edinburgh. It was positioned close to Echline Junction, above the main A90, with the junction offering directions to both Ferrymuir services and Forthview services.

The A8000 was replaced in 2006, and in 2017 the A90 Forth Road Bridge was restricted to buses, taxis and motorcycles only after the completion of the M90 Queensferry Crossing. The old road, now the A9000, still has at least some signs referring to "services", it's just that general traffic rarely has the opportunity to see them.

As a result, Ferrymuir no longer gets the delight of being positioned near a main road. The new Queensferry Junction on the A90 has "services" signs pointing to Forthview on the A904, and only when you get there, does it say that "alternative services" are available at the Ferrymuir site.

The Forth Road Bridge opened in 1964, with a large toll booth at South Queensferry. At the junction of the service road called Ferrmuir Gate and the new Echline Junction was a new garage. That garage became a Shell forecourt and it became known as Forth Road Bridge services.

Forth Road Bridge services was signposted from the A8000 Ferry Muir Road with a number of direction signs calling it "Services".

Further down Ferrmuir Gate, and overlooking the estuary and the bridge, the Forth Bridges Motel opened in 1968. This was a large, three-storey, block-shaped building with an excellent view across the Forth Estuary from both the hotel and the car park. This distinctive building was widely regarded as being part of the 'service area' at the other end of the road, and Ordnance Survey mapping showed 'services' symbol where the hotel was.

Outline planning permission was granted in 1999 for a mixed-use development on the south side of the A8000 Ferry Muir Road. At the time this road carried a signifiant amount of cross-country traffic, although this was still more of a retail development that was still primarily aimed at locals.

A combined plan from FR Evans Leeds Ltd and Tesco in 2000 saw a Tesco supermarket and filling station built along with a Burger King Drive Thru restaurant and Frankie & Benny's, all of which opened in 2001. This offer became advertised as 'Ferrymuir services', which piggy-backed on the signage already directing traffic down Ferry Muir Road for the older Forth Road Bridge services.

The Tesco supermarket has since received several extensions, and the filling station gained a car wash in 2007. The car park also gained a Pod Point electric vehicle charging point in 2020. A Dakota Hotel and Bar was also added in 2004.

The Forth Bridges Motel became the South Queensferry Hotel in the 1990s, and gained a café on the ground floor which was aimed at parking traffic. The hotel became tired and closed in 1999, being demolished shortly afterwards.

A brief refurbishment of the Shell forecourt in August 2016 also saw the official signs removed and not replaced. One reason for this is that it benefits from the signs pointing to the surrounding services anyway. A large car and lorry park are still provided at the end of Ferrymuir Gait, providing access to the Forth Bridges viewpoint, but this is no longer considered a formal service area.

Since the demolition of the hotel, there have been several plans to utilise the land for housing developments, with the latest from Ambassador Homes currently ongoing. The area itself is now branded 'The Forth Bridges', appealing to tourists.