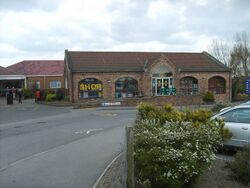 Leeming's unusual history started with the Motel Leeming, which was positioned by the northbound side of the old A1, at the Leeming exit. This is believed to date back to 1961. The same family-ran the site for the following 50 years.

Fuelling facilities were added to the site in 1977, and it was then regarded as a full service area. Mobil was thought to be the main fuel partner.

The Yorkshire Maid shop was built in its own building, next to the main car park. It also acted as a tourist information centre and a conference room. Benedict's restaurant operated inside the motel. The Leeming Café was built at the front of the building, with customers able to use an entrance into the café or an entrance by the hotel reception, which both linked up at the back. The toilets have their own entrance at the front of the building.

A McDonald's was built behind the main building in 2000, on land they lease from the service area.

By the 2000s, the petrol station was branded Topspot ("Spot Petroleum"), but it closed and was boarded up. It reopened in 2010 as a Texaco.

Since at least 1989, there have been plans to replace this section of the A1 with a new motorway. This has been a cause for concern for Leeming Bar, which needed to ensure it would fit in with the new plans.

The plan for the new motorway was confirmed in 2008, and several developers applied for permission to develop new service areas along it. This led to a public inquiry in 2012. One of those plans was an outline application from Leeming Bar, to turn it into a motorway service area.

Moto initially argued against such an idea, calling the proposal "sub-optimal" and "unattractive", and arguing that it wasn't needed. Leeming Bar privately accepted that they didn't have the money to finance this upgrade, so Moto later offered to purchase Leeming Bar and fund its upgrade if the planning application was successful.

During the inquiry the Highways Agency confirmed that as things stood, Leeming Bar would not be signposted from the motorway. The Secretary of State placed great weight on the re-using of existing facilities instead of building new ones. This was Leeming Bar's main selling point and led to it being granted planning permission. The decision was unsuccessfully challenged in 2013.

Moto purchased Leeming Bar on 3 February 2014. This gave Moto a near-monopoly on service areas between Blyth and Washington.

With work already started on the new motorway, the newly-renamed Highways England changed their mind and ruled that Leeming Bar could have new signs calling it a rest area, and that these signs would be changed to a full motorway service area once the service area had ben upgraded. The main issues preventing it going straight to service area status are the small car park, and the small toilets.

In the meantime, Moto quickly changed the petrol station from Texaco to their usual partner, BP. The Leeming Café underwent a minor refurbishment and was branded as Costa, though it retained a hot food counter and served EDC's menu.

The large shop, the Yorkshire Maid, closed and was replaced by a small shop with WHSmith fittings. The McDonald's continues to trade although Moto placed several adverts for Burger King inside the main building, a partner which they don't use here. The lodge retained its independent branding and character, despite now falling under the Moto family: Moto direct all customers to Booking.com as they can't do what they would normally do and promote the Travelodge website.

In October 2019 the WHSmith shop temporarily closed, reopening in early 2020. It then closed permanently after the 2021 COVID-19 lockdown. The lodge also closed during the COVID-19 pandemic and Moto currently have no plans to reopen it.