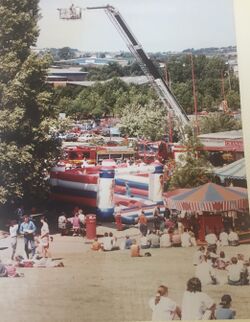 Exeter services sits in a crowded corner at the end of the M5, but its location was selected from a number of options.

As the M5 was extended to Exeter, it was suggested services be built near Exeter and Willand. A search of these areas initially looked for suitable camping and picnic sites, with the area west of the River Exe ruled out because of the earthworks required.

The first site to be examined was at the unbuilt M5 J29A, Broadclyst Moor. This was ruled out because of the likely objections, and because it could interfere with the construction of the Exeter Northern Bypass, which in the event wasn't built.

The only site suitable for a service station to be located between any junctions was at Poltimore. This was more likely to interrupt the Northern Bypass, and would require a new bridge to be built as well as integration with the proposed M5 J29A. Objections were likely.

Two sites at M5 J29, Sowton, were also examined. One in the south west corner was described as being an odd shape of land difficult to build on, "like Aust but without the view". The second was in the south east corner and was easier to build on, but more likely to encounter objections.

Poltimore and Sowton West were preferred. Several options to connect Poltimore to M5 J29A were considered, but with too many concerns, a wider search considered Sandy Gate. It was described as "difficult although not impossible" to develop, "complicated by severe internal gradients", with planning permission already given for mineral working.

The Sandy Gate site proved to be easiest to build in planning, and it opened as Exeter services. It's 19.5 acres in size.

The site was opened to tenders in August 1974. Only one bid was received, and after some negotiation, Granada won the contract. Granada purchased land next to the service area, which was interpreted as a threat to build a rival facility if they didn't win. At the time the Ministry received rent dependent on sales, so if Granada were taking trade from the winning firm, that would show in the government's finances.

The government called the situation "only the minimal acceptable return on our investment", which was a reflection on. the poor state of the industry. Granada spent £1,675,000 on the project, and they said they wouldn't be spending that much anywhere else.

The service area officially opened in 1978, but in 1977 a temporary takeaway building opened. Two roundabouts outside the service areas would have been much quieter than they are today, but it was always the intention to turn this area into an industrial estate.

The contract required a lorry park and transport café be built, but with a warning that another company may be building a lorry park opposite.

The Department for Transport suggested that the building be to the north of the site, and the picnic area be on the top of the hill. At least two brands of fuel were required to be sold at the forecourt.

A 58-bedroom Granada Lodge opened on 16 July 1986, utilising private land technically not part of the main service area development. This may well be the "additional land" referred to above. It charged £25 for a single room.

Until 1997 the toilets were accessed directly from the car park, alongside a shop, restaurant, and new Burger King. A roof was then provided over all these doors to direct people towards the restaurants. This entry layout remains to this day.

In 1993 there were plans for a separate truck driver's wash room which fell through. Granada have also considered building a caravan park here, with laundry facilities. 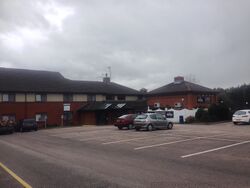 The hotel and restaurant.

Exeter was the only Granada site ever to have a Harry Ramsden's waitress service, which was built into the hotel and opened in October 1996. The restaurant stayed here many years after all the other motorway sites had closed.

On 23 March 2006 the services gained an M&S Simply Food store, which was opened by Exeter FC manager Alex Inglethorpe.

It has a large food court area which is now home to three Costas - at one point it only offered a restaurant with no coffee options. EDC was further scaled back in March 2014 when an internal Greggs store opened, and it was removed in 2017. There is also a separate, unrelated Greggs branch in the industrial estate opposite.

In 2000 there were plans for Granada 2Go to be fitted to the front of the services. Granada wanted to use the parcel of land near the entrance to set up a separate shop and car park. There were later plans to extend the lobby area, putting a Costa stand within it.

A separate building housed one of the English Tourist Board tourist information centres on the motorway network, which closed and in 1999 became Ladbrokes. Around the same time there was an ice cream kiosk operating in the car park, but it was ordered to move, replacing a picnic box. The haphazard array of extensions and facilities was noted at the time.

The 2022 Transport Focus survey calculated a 96% satisfaction score for the service area.

In 2021, Which? Magazine ranked Exeter 43rd out of the 68 service areas they visited.

In 2015, the services were rated 3 stars by VisitEngland.

In May 2012 and August 2011 VisitEngland rated the services as 4 stars and liked its environmental credentials.

A 1978 government review described the services as "the best" - but it hadn't been open long at the time!

The temporary café was visited by Egon Ronay in 1977, who described it as "appalling". He particularly didn't like the chicken flavoured soup served which he said was served in a "cardboard cup with more flavour than it".