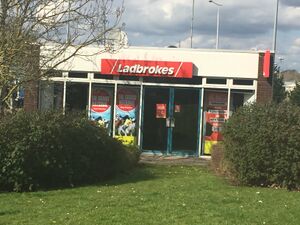 Ladbrokes is a bookmakers which was found at many of Moto's busiest services. Often it would be positioned in a small shack adjacent to the main amenity building, which made it easier to manage the gambling regulations.

It was an initiative that was first started in 1995 with a trial at three Granada services. Granada struggled to convince the Highways Agency that a betting office was an appropriate facility to have at a service area. In 1995 the Highways Agency issued a memorandum saying that there was nothing technically wrong with having a bookmakers, but that they were still reluctant to see them introduced.

Roadchef intended to trial Ladbrokes at Strensham, but this never happened. Most of Moto's stores closed in 2019.

On a related note, in 1986 Granada considered a merger with Ladbrokes. Talks didn't lead anywhere but it could have seen the two brands work much closer.

Operators had been trying to introduce a betting shop to service stations since the early days, but they had to accept that as services were built using Compulsory Purchase Orders, the Ministry couldn't allow them to operate more than the basic facilities.

The subject was brought back to the table in 1971, when an illicit but very successful betting business was discovered amongst users of the café at Trowell. The government of the time still refused to permit official shops.

Ladbrokes used to be found at the following service areas: