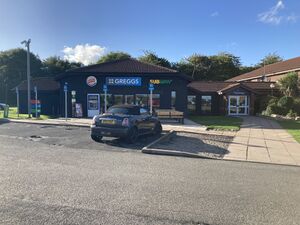 A194 at the Whitemare Pool roundabout

A former Little Chef restaurant at the roundabout on the outskirts of Newcastle. 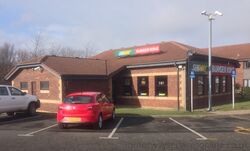 The petrol station here was built in the 1970s, on Leam Lane, newly diverted away from the old Roman Road. It was operated by Shell, and it gained a sales building in the early 1980s.

Trusthouse Forte had initially looked at building a Happy Eater near here, but in 1988 they opened the Whitemare Pool branch of Little ChefHistory here instead alongside a 40-bed Travelodge hotel, providing the missing facilities to the service area.

The Travelodge hotel received a 32-bed extension in 1995, almost doubling the site of hotel whilst the Little Chef restaurant gained a Burger King in 1998. There were also plans in 2007 to add an cash machine next to the main entrance in its own pod, but this didn't happen.

The Little Chef restaurant later closed as part of R Capital's closures in 2012, with the Burger King left trading alone. R Capital later replaced the Little Chef area with a Subway in 2014 as a trial for their future developments. This trial didn't work for them, and R Capital's remaining estate was sold to Euro Garages in January 2017. Euro Garages later refurbished the existing facilities in late 2018 and added a new Greggs store in early 2019.