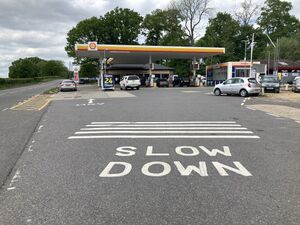 The only service area on the road between Basingstoke and Newbury.

The provision of an official service area here makes more sense when you consider that the A339 was regarded as a major road until the Newbury Bypass opened in 1998. It was maintained by the Highways Agency until 2003.

There continues to be disagreement between the highway authorities in Hampshire and Berkshire over whether the A339 should be promoted as a major road or not. In 2010, Hampshire County Council replaced the Highways Agency's old green 'services' signs with their own white ones.

The site dates back to the 1960s, when a garage was built next to Newbury Road. By 1986 the garage was selling both fuel and used cars, under the name West Kingsclere Garage. It is now a formal petrol station, though there is still an MOT centre on the site.

A Little Chef restaurant opened in around 1985. It closed in 2001, and reopened as Nelson's Diner. It then became Nellie's Diner, and is now closed. In 1990, planning permission was approved to add a 16-bed single-storey lodge to the site.