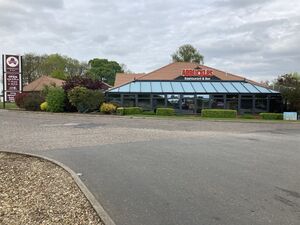 A10 at Downham Market

This is a service area on the A10 in Norfolk. For the one on the A31 in the New Forest, see Stoney Cross.

A small petrol station on the A10 as it passes Downham Market. 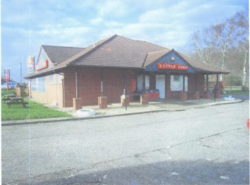 There were the remains of a stone cross just west of here, hence the name of the Stone Cross Estate and subsequently this service area.

The service area was developed by AJ's and Mobil in the early 1990s. There were plans to add a hotel next to it but this didn't happen. Instead it became the Downham Market branch of Little ChefHistory in 1997, and was closed in 2007 with the restaurant reopening as an American diner called Arbuckles on 10 March 2008.

The filling station was previously branded Q8. This became Jet in the 2000s, and later BP. The filling station was later acquired by MRH in the mid-2010s who added their own-branded Hursts store to the site. This later became part of MFG's network following the merger of MRH and MFG, with the store rebranding to Londis in 2022.

The Arbuckles restaurant suffered major flood damage following a large rain storm in the area on 17 June 2020, with some parts of the building under 30cm of water. The restaurant reopened on 12 October 2020.

MFG currently hold planning permission to extend the existing forecourt shop to introduce a Greggs store to the site. The plans also include relocation of the HGV pumps, adding 7 new parking bays and 2 jet washes.