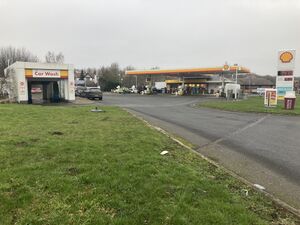 Many different facilities clustered around an important roundabout, like several services in the east of England, however these have now condensed to provide just the core facilities.

Parking within the Costa and The Big Fish shared car park is limited to 3 hours maximum stay and is strictly enforced.

Only the south-west corner of the junction receives 'services' signs. This part caters mainly for northbound traffic on the A614.

It includes the Shell forecourt, Costa Coffee Drive Thru and The Big Fish takeaway restaurant. The site was originally planned as a Happy Eater restaurant but was eventually built as a Little Chef restaurant in 1995, gaining a Burger King franchise in 1998; Little Chef's influence is probably the reason it is signed.

The Little Chef and Burger King both closed in 2005 and the building was sold to become The Big Fish restaurant between 2006 and 2008.

The Big Fish restaurant closed in October 2020, reopening as a new Costa Drive Thru on 10 April 2021. Part of the building facing the roundabout had to be demolished to make way for a curve in the drive thru lane. The Big Fish later returned to the site as a takeaway-only offering positioned at the back of the existing building, reopening on 17 June 2021. 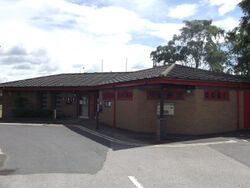 In the south-east corner and serving mainly southbound traffic on the A614 is another forecourt (this one dating back to the 1950s), and a McDonald's outlet. The forecourt was branded Texaco until 2011, when it became a Total, and then an Esso with a Hursts store in 2015 operated by MRH until 2019, when it was taken over by MFG. In August 2021, the store was rebranded to Londis.

On the western side was a small car park and Tourist Information Centre with toilets. This was built in the 1980s and demolished in summer 2015, being replaced with a Marstons pub called The Alders. There is also a café opposite the pub, it opened as Forest Corner Café, before becoming Forest Corner Snacks in 2015 and Green Hut Café in 2016.

All the unsigned facilities are just as easily-accessed from the roundabout as the signposted services. All facilities are available from either side of the road.