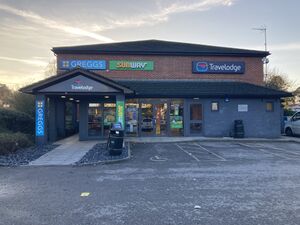 A31 eastbound near Ringwood

St Leonards services isn't signposted but it is marked by the Ordnance Survey. The forecourt is only available eastbound (but close to two roundabouts) while the restaurant and hotel are accessed from a roundabout. 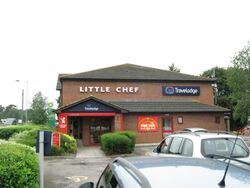 The combined Little Chef and Travelodge building, pictured in 2011.

As the A31 skirts St Leonards, it offers several facilities for motorists. None of these are regarded as an official service area, but one is good enough to be treated as such by the Ordnance Survey. This the neighbouring hotel, restaurant and petrol station described on this page.

This facility started with a Little Chef which was believed to have opened on a site called Rest-A-While in around 1960. This was next to the crossroads at what is now called Woodsbridge Roundabout.

The restaurant gained a partner in 1986, when a Happy Eater opened on the other side of the road, a little to the west. The two were soon both owned by Forte and worked side-by-side until around 1996, when the Happy Eater closed.

Meanwhile the Little Chef building, which was now rather old, was re-built in 2001. It now had a large hotel, with the restaurant relegated to a tiny corner. Despite this size, it was soon promoted to being a Little Chef Choices site, which saw it offer the menu of Caffè Ritazza and Harry Ramsden's too. This was a short-lived concept.

When it was re-built, Travelodge and Little Chef were two faces of the same company, so sharing the building made a lot of sense. It became more complicated when Travelodge sold Little Chef, but Little Chef continued to lease the space from their former colleagues.

When Euro Garages acquired Little Chef in 2017, they soon closed the restaurant. After some deliberation, they changed the restaurant to a Greggs. A Subway was also later squeezed into the opposite corner on the building.

Meanwhile, the filling station had been branded Shell. It was purchased by BP in the early 2010s, and in 2012 they redeveloped it, turning it into one of their BP Connect sites. The new forecourt featured a larger sales building with a M&S Simply Food and Wild Bean Café.