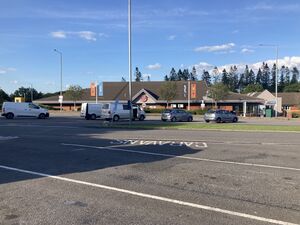 Like many M4 services, Swansea's low footfall is reflected in its lack of refurbishment. There is a McDonald's and Forestry Commission site which aren't part of the main services but are located down the same road.

Prices are paid using PayByPhone. The location code is 2465. 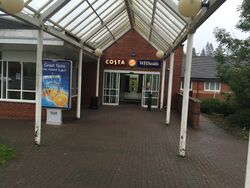 The service area opened on 9 August 1991, with an official opening for the Rank Motor Lodge held on 13 September 1991 with Dr Gwyn Jones, chair of the Welsh Development Agency, in attendance. At the time, the Welsh M4 was one of very few motorways where any company could plan a new service area. Rank were looking to slot in beside two of their rivals to get a bit more market share.

Within four months of Swansea services opening, Rank revealed that they were in financial difficulty and sold all of their sites, including Swansea. Building Swansea may have been an effort to increase the value of the business knowing a sale was on the horizon.

As a consequence of this history, Swansea has a small market share of what is already a quiet motorway. It hasn't seen the dramatic increase in custom that most other motorway service areas have experienced and this has caused it to miss out on some refurbishment schemes, and to still feature old fixtures and furniture.

Further harm was caused in 1999, when the McDonald's opened next door. Granada immediately complained that it had an impact on their restaurant. They considered closing their Burger King as a result, but eventually accepted their Burger King would be better than nothing.

The main building is now only open from 5:30am until 10pm. After this, customers are directed to the petrol station.

Even the car park turned out to be larger than needed, and Moto weren't sure what to do with it. They considered using the end of it as a car sales area, but eventually decided to designate this section 'long stay' for commuter traffic.

The square amenity building has only one main entrance, which used to have a covered canopy pointing to the car park. This was a small reminder of Rank's love for elaborate architecture, even at what was supposed to be a low-budget site. There is then a large building with lots of facilities shoehorned tightly into it.

When it opened there was a Yorkie's Transport Diner, and a Top Rank Motor Lodge, which was accessed from inside the main amenity building. The hotel was later branded Pavilion Lodge, then Granada Lodge, and is now Travelodge.

In 1995, there was a plan for a drive thru fast food restaurant here. 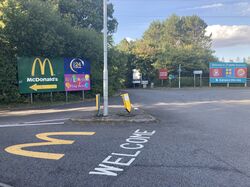 The two facilities compete for attention with their many signs.

Moto publicly refer to the service area by the name 'Swansea', but the signs on the motorway (which haven't been replaced since it opened) still call it 'Swansea West'. As this has to be joined by the Welsh translation Gwasanaethau Gorllewin Abertawe, this creates quite a lengthy sign.

The Costa logo on the eastbound sign fell down in 2015, revealing half of the Rank logo that was underneath it, as this is what was on the original sign. It wasn't covered up until early 2018.

A large "Moto this way" sign has been placed on the access road to distract attention from the 24-hour McDonald's which is accessed from the same exit. The two now both have large advertisements, both vying for drivers' attention.