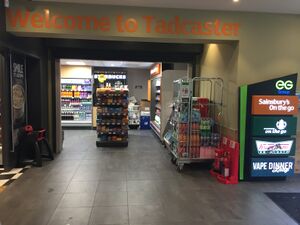 Supermarket giant Sainsbury's has made several efforts to get a foot in on the major road network, but none of them have been especially successful.

Until the 1990s, the Sainsbury's business model included building large supermarkets close to major roads. Despite this, none of them became official service stations, although customers used some of them as unofficial ones. Since then, they have targetted road users more directly.

Sainsbury's On the go

The most recent effort was called Sainsbury's On the go, and was operated by EG Group.

It launched in 2019 and focused on Sainsbury's' food-to-go offer. Each store also had a Starbucks on the Go machine.

Initially the stores took up a spare unit, usually at old Little Chef sites. EG Group then started using the 'Sainsbury's On the go' name to describe the main shopping area of their filling stations. For Sainsbury's, it was an opportunity to break away from the traditional 'big box' supermarket format, and to focus on the increasingly important convenience store market.

The first three closures happened in March 2020, with staff being made redundant at Alfreton, Bilbrough and Talke. The majority had closed by April 2021, with many becoming SPAR.

EG Group's purchase of Asda, which went public in September 2020, gave them further reason to stop using the Sainsbury's brand, with a corresponding 'ASDA On the Move' being trialled.

Previously, following the success of M&S Simply Food, Welcome Break trialled a branch of Sainsbury's' existing convenience brand Sainsbury's Local at Birchanger Green in September 2006. The vast majority of the stock was fresh, own-label food, usually from its premium range, and was part of a new aim from Sainsbury's to launch itself into the travel sector.

This store closed after a six month trial, and Welcome Break later worked with the more upmarket Waitrose. The Highways Agency had expressed concern that the supermarket would breach the destination in its own right rule that was in place at the time, but they were assured that it was more of a convenience store than a supermarket.

Sainsbury's on the go used to be found at the following signposted service areas: