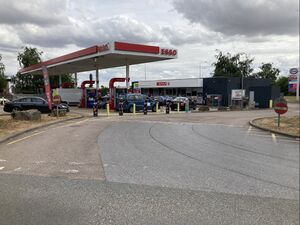 Baynard's Green is a small petrol station next to the roundabout by the start of the A43. As it's so close to Cherwell Valley, many of the road signs were taken down, though a few remain. 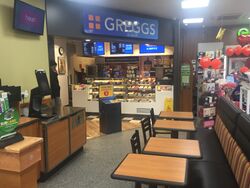 Inside the forecourt shop.

The roundabout here used to be where the A43 crossed the main A41. A small Esso filling station was provided in the north-east corner.

In the early 2000s, the A43 was replaced by a new dual carriageway to the east. Remarkably, this skirted the side of the petrol station, saving it from demolition, although some of its land was taken away. The road connecting to the service area, which is used as a lay-by, is the original A43.

A McDonald's opened in 2018 on the remains of a field to the north. The car park used to feature a PodPoint electric vehicle charging point but this was replaced by 2 InstaVolt chargers in June 2022.