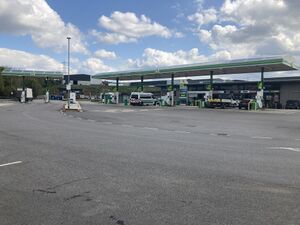 Frontier Park is a development project on the eastern outskirts of Blackburn. Mostly it is going to be filled with warehouses, but plots of land have been developed by EG Group to create one of their largest projects to date. 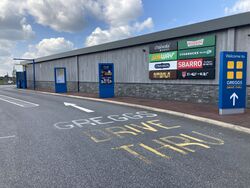 BP call the site Whitebirk services, though it is widely known as being just a segment of Frontier Park.

Proposals for Frontier Park began in early 2016, with construction starting in the summer of 2017. Each development is situated along a corridor road, which spans from the Whitebirk Roundabout.

The petrol station and its and its accompanying facilities opened in October 2018. It is position in the north-east quadrant and immediately accessible from the roundabout, with 10 pumps for cars and four for HGVs. This has a transparent curved canopy, along with a large SPAR convenience store in Euro Garages' typical design language and offering the company's usual mixture of concessions.

The site also includes one of the UK's only Greggs drive thrus, immediately accessible when entering the forecourt. Opposite the petrol station on the entry route, the right-side features two more drive thru units facing each other, one of which is a Euro Garages' 110th Starbucks Drive Thru and the other is a KFC Drive Thru.

The site continues to be treated as one of EG Group's premier sites, not just for its wide selection of drive thrus, but also because it's one of the first to trial new brand partners. On 4 December 2020 EG Group opened Sbarro and the UK's first Cinnabon, both inside the petrol station. Almost exactly a year later, EG Group added a Chaiiwala Express unit inside the petrol station on 7 December 2021.

A Hampton by Hilton hotel with conferencing facilities opened in December 2020 and is located opposite the filling station on the main access road. Like many others, Hilton call this place a "motorway service area".