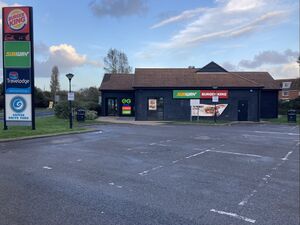 23 more photos in the gallery
Location:

A suburban service station at The Body Shop Roundabout on the Rustington Bypass. 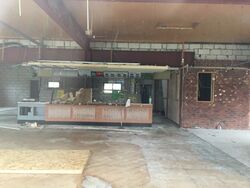 The stripped out restaurant building in November 2018.

When the Rustington Bypass was built in the 1980s, land around what's now known as The Body Shop Roundabout was earmarked to become a business park. In 1987 Store Property Investments designated part of this land for use as a petrol station and restaurant, which involved adding another new roundabout on Worthing Road.

In June 1991 Forte opened the petrol station and a Little Chef, and shortly afterwards they started working on a Travelodge. Although Forte called their facilities Rustington, the petrol station became known as Eastfield. The main restaurant closed in 2011 and the site became a Burger King-only site. A Subway opened within the former Little Chef restaurant in 2017.

Although there was now no Little Chef restaurant here, Little Chef still owned the building and its restaurants. This continued until they were sold to Euro Garages. Euro Garages closed the building in summer 2018 with the intention of totally refurbishing it, as they had been doing with many of the former Little Chefs at the same time. However, the addition of a Greggs was hampered by objections, and instead the building was left empty until January 2019. The following month it reopened with a refurbished Burger King and Subway.

Shell redeveloped the forecourt in summer 2019, adding a new, larger sales building which reopened with a Little Waitrose offering.

The Coastal Coffee building was a separate development added in 2017. It has an agreement with EG Group to be advertised from their totem pole.