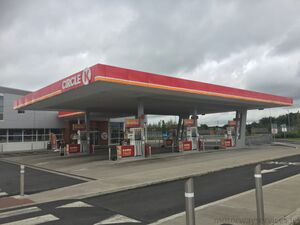 Circle K is a forecourt operator and fuel brand with a large number of sites across the island of Ireland.

The Circle K name was introduced to Ireland in 2018 by its Canadian owners Alimentation Couche-Tard, following their takeover of Topaz. The rebranding included a number of privately owned motorway service areas, and an ongoing contract to open three new official motorway sties.

The first Circle K to open in Ireland was Fermoy. The three new motorway sites, with Gorey being the first to open, were also treated as flagship sites.

The rebranding introduced a number of names to their forecourts, including Miles fuel, Cantina Mexican Takeaway, The Good Catch and Real Hot Dogs and a Deli. The three main motorway sites include a full restaurant, and Circle K also works with franchises such as McDonald's and Supermac's. A new partnership with Camile Thai launched in 2020, which saw Petite Camile stores introduced to its motorway sites in place of Cantina.

A number of local petrol stations are operated by franchise partners, where they are known as Circle K Express. These don't include the usual Circle K range, but instead have the owner's choice of shop, usually a Centra.

Meanwhile, in September 2021, Circle K purchased a number of Londis stores in Dublin city centre, and these all became Circle Ks in January 2022. This marks the start of Circle K moving from being purely a forecourt retailer to a chain of urban convenience stores, a very unusual move in Europe but it brings them in line with their operations in Canada and Hong Kong. Circle K have said they are interested in opening non-fuel stores in other Irish cities.