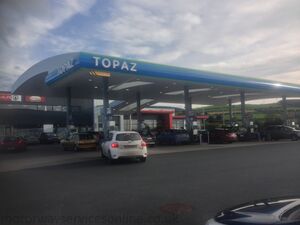 Topaz was one of the largest fuel retailers in Ireland. As they were active around the time that Ireland's motorway network began to come together, they built several private service areas, starting with a smaller one at Cashel.

In 2015, Topaz won the contract to operate three new official motorway service areas on behalf of the Irish state. However, the process was riddled with objections, and by the time the three sites opened, Topaz had been rebranded.

In 1992, BP's Irish operations were taken over by Statoil. In 2005, Ion Equity took control of both Statoil and Shell's Irish sites. Both companies had been reputation damaged by the Corrib gas controversy, which peaked in 2005 but would continue for many years after.

In 2008, Ion Equity decided to bring both of those brands under the new name, 'Topaz'.

A further acquisition in 2014 gave Topaz control of all of Esso's Irish sites. This gave Topaz widespread coverage across Ireland, with some sites competing very close together. Many of the Esso sites were never fully rebranded, with plenty of Esso 'tiger' branding still visible years later.

In 2016, Topaz was purchased by Alimentation Couche-Tard, the owner of American fuel and convenience store brand Circle K. A high-profile launch event for Miles, the brand name of Circle K's fuel, was held in July 2017.

Topaz had said they would continue to operate under their own name, with Miles, Simply Great Coffee and Re.Store being the products they provided. However, when asked about their future plans, Topaz had said "when and what [the name] will be replaced with is not something we can say comment upon" (sic).

In early 2018 their website was updated to say that they will "rebrand 420 sites nationwide from Topaz to Circle K". Fermoy was the first site to acknowledge the new brand, with many more following throughout Spring. 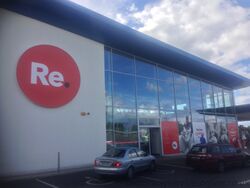 Topaz's company-owned filling stations had their forecourt shop branded Re.Store. This doubled up as both the filling station pay point, and a deli and café, sometimes including other franchised units. At the largest motorway sites there was a separate entrance for customers not purchasing fuel.

Re.Store was removed from each site when it was changed to Circle K. That change wasn't always particularly thorough and initially there were plenty of Re.Store logos to be found.

At sites which weren't owned by Topaz, other shop names like Centra would be used.

They also provided fuel at the following official service areas: