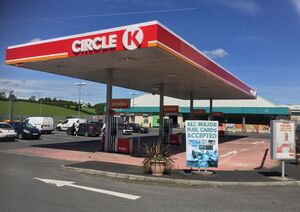 A1 northbound after Banbridge

The first signposted service area on the northern side of the border, roughly halfway between Newry and Belfast. It is only available on the northbound side. 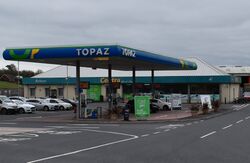 The forecourt branded Topaz in 2017.

Barbican services is built on part of the Banbridge Coachworks site, which was partially sold off and demolished in 2010.

The service station was first planned in 2006. There was also a plan to build a drive thru restaurant on the land next to the A1 which didn't happen, and instead it was used for parking and now a climbing frame sales shop.

The rest of the coachworks and other industrial units continue to be accessed through the services.

The forecourt brand was originally Topaz. It changed to Circle K Express in 2018, and then changed again to GO in February 2021. This involved the addition of pay at pump, allowing fuel sales to take place at night.

The shop has always been branded Centra, who know it as the 'A1' branch (sometimes 'A1 Banbridge').