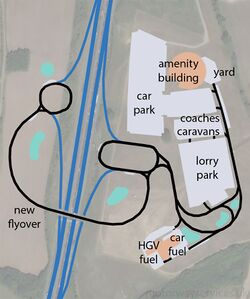 The proposed relationship between the M25 and Chiltern Chalfont services.

Chiltern Chalfont services is the latest twist in the long-running saga over how the gap in the M25's service areas will be filled.

It is planned by Extra, and proposed to be built at a new interchange, on the M25 between J16 and J17. The facilities will all be placed to the east of the motorway, with a new flyover linking two roundabouts.

If built, there would be a large amenity building in the north-east corner of the site. It would be a perfect circle, with 11 units and four more kiosks inside. A service corridor would run around the outside. As is common with Extra services, no brands had been named, as this would have depended on what interest was received - but you could expect the interest to be similar to what is at Leeds Skelton Lake.

The building would have a glass roof, with a leaf-shaped roof light. The food units would be surrounded by the large windows at the front. The leaf would be one of many references to the Chilterns area, which Chiltern Chalfont services claims to champion.

There would be 759 car parking spaces, with 20 electric vehicle charging points and the potential to create up to 120 more. There would be 142 spaces for HGVs and 19 coaches. Closer to the large entry roundabout would be a fuelling area, with a central building accessed from two separate sides.

In justifying that scheme, Extra had stated that there was a "significant public safety need" to address driver tiredness, and they have argued that it is a better proposal than Colne Valley, which is also in the planning stages. Buckinghamshire County Council had agreed that the region does not have enough HGV parking spaces.

Extra say they have chosen the eastern side of the M25 following lessons learned from the objectors, and "significant landscaping" will be provided. The new site is part of the current HS2 construction site, but won't be affected by the finished project.

A dedicated mini-site has been created for information on the project, while Chiltern District Council hold the official plans.

The planned Chiltern Chalfont service area was Extra's immediate response to their failed project on the other side of the road: Warren Farm. That project started in 2018 but planning permission was refused after a public inquiry in November 2021.

Here, the amenity building itself would have been shaped like a giant leaf, with a grass roof except for another leaf-shaped glass section, all attached to the hotel by a glazed entrance. At the back would have been a walk around a lake, feeding into a stream which would run down the middle of the car park.

Inside the building would have been 12 units spread out around a central seating area, with toilets at the back. Two of those units would have had a mezzanine area, with a business centre and offices joining them on the first floor. An on-site hotel would have had its own dedicated restaurant area.

The forecourt would have had 36 car pumps and would also have had a grass roof, as would the hotel. A large HGV parking area had been designated. A number of variations of the masterplan were published, experimenting with different building positions and road layouts.

The Warren Farm plan received numerous objections and concerns, including from local action group SENSE4CSP and Thames Valley Police. It is reasonable to assume that many of these objectors will be making their views known again. Extra say that they took the feedback from the inquiry on board, before quickly responding with a new proposal for the opposite side of the road.

Even in the 1970s, the M25's service areas faced deep planning difficulties. After Iver wasn't built, there was a large gap for the private sector to fill.

This Warren Farm land was the subject of a service area planned between 1996 and 1999, by Total. This would have had facilities on both sides of the road. The plan was rejected at the 1999 public inquiry and Cobham was eventually built instead, but that is at full capacity.

In August 2017, Highways England started building a new exit on the M25 south of J17, which was to allow construction vehicles direct access to the High Speed 2 railway construction site. They claim the slip roads (which are very well-aligned) would only have 10 years service. In October 2018, Extra announced that they wanted to use this site in future to build a large service station.

Publicity for the Extra plan was released in October 2018, with local consultations held in January 2019, and an outline planning application submitted in July 2019. Highways England otherwise gave their approval to the proposals in November 2020, but the local authority announced in June 2021 that it was "minded to refuse" the plan on the grounds that it would be inappropriate in the green belt.

The plan for Warren Farm stood against other motorway service areas planned for this part of the M25, namely Moto's Kings Langley and Welcome Break's Colne Valley. Technically, there is no reason why all three couldn't be built, but it would be very unlikely that this could be justified. In the event, Kings Langley and the original Warren Farm plan have both been refused.

By this point a public inquiry was already required, and this ruled against the proposal in November 2021. In March 2022 Extra went public with the new proposal.