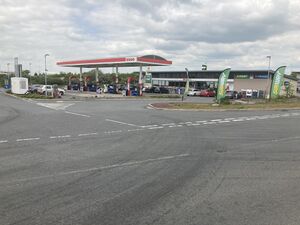 A11 at Snetterton Park

The old Snetterton Circuit has partly become a business park, and Euro Garages have opened a facility next to the A11 to serve it.

The area around Snetterton Circuit is being developed into a business park, known as the Snetterton Heath Employment Area. This growth was mired by the abandoned Ships Galley Restaurant, uniquely shaped to look like a ship, which stood in the field opposite. That building used to face the main Snetterton Circuit and was removed when the A11 was built in the 2000s. That former restaurant was acquired by Euro Garages and demolished to create this service area.

There had previously been plans to turn the former restaurant into offices, and the first plan from Euro Garages would have had a single amenity building with five food units around it. The filling station and Starbucks Drive Thru opened in July 2019 with the McDonald's Drive Thru opening in October 2019.

This is not the first time a service station has been built here. The southbound side of the old, single carriageway A11 London Road had a petrol station built in the 1960s, which doubled-up as an entrance to Snetteron Circuit. In 1980 the Snetterton branch of Little Chef was built next to it. When the A11 was upgraded to dual carriageway, the service area was provided with a new access from the roundabout at the new Snetterton Park junction. The forecourt was demolished shortly afterwards, and the restaurant closed in 2002. The building was re-used as Flame Restaurant, and was more recently home to a sales facility by Holbrook Leisure. The site is now empty.