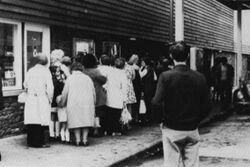 Tebay's remarkable story has led to a business plan which stands out from its rivals, but not everybody has been kind about it. In 1979, representatives of the Department of Transport finished a meeting with Mr Dunning with their notes saying "he is a seemingly naive hill farmer".

Naive or not, the Dunning family's background in farming is what has made Tebay stand out. The UK's motorway service area planning system pretty much locked small businesses out the picture. Tebay was lucky to break through this, and as the other service stations became increasingly homogenised, Tebay's unique background and close relationship with its local area meant it headed off in a completely different direction.

When the M6 was built through Cumbria in the late 1960s, the Ministry of Transport were working on the principle that placing service stations in places with good views would get more people to stop. For this reason, service areas were proposed at Tebay northbound and Killington Lake southbound. This would ensure motorists on both sides got the best scenery, and building two smaller services would have been more popular with the cash-poor operators than having to fight over one large one.

Before this decision was confirmed, the idea of building the services in the middle of the M6 was considered. The two sides of the motorway were already going to be built far apart to reduce the amount of earthwork required. Building in the middle was quickly ruled out as being impractical and destructive, and a layout like that has never been used in the UK.

As it happened, the operators weren't interested in the split Tebay/Killington proposal either. They didn't believe that such a remote area would have enough traffic (especially HGVs) to turn a profit, and as even the busiest service stations were struggling to turn a profit, the existing operators weren't willing to take a chance on Tebay. Invitations to tender were sent in 1968, requesting a minimum investment of £200,000, but no replies were received.

As a result, Tebay was opened to bids a second time in 1969, but this time the proposal was for a smaller site managed on a 10 or 21 year lease. Under this arrangement, the successful tenderer would only be responsible for running the filling station and a temporary snack bar. The main restaurant would be built by a second operator, who would be found at a later date.

High Chapel Farm, managed by the Dunning family, had already had its land severed by the new M6. They were also concerned about the local unemployment rate, following the recent closure of Tebay Junction station. Managing a service station was something they had no experience of at all - after all, as the M6 was still under construction, there weren't even any motorways in Cumbria. It was a gamble, but one that recognised that the M6 was going to change the region and offer new opportunities.

Their bid for the northbound only service area at Tebay was a success. It opened as a petrol station and a dining area, costing £100,000 to build, making it one of the cheapest service areas at the time. It opened at 9am on 27 June 1972 (the documents were signed on 15 June), two years after the M6 was finished. They decided to use the brand name Westmorland, referring to the county which was about to be withdrawn. 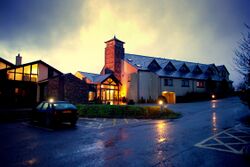 The Westmorland Hotel - not a budget chain motel.

When it opened, inspectors described Tebay as "personal", referring to its small scale and simple styling. It wasn't suffering from all the vandalism that its rivals were, partly because it was so remote. The building was made of stone, and the interior had a high-pitched beamed roof and a rustic décor which tried to recapture a Scandinavian hunting lodge atmosphere.

Outside, there was a small car park, positioned east of the building, with a hill cutting behind that. It was a small development which reflected the fact that the Ministry had only envisaged a temporary arrangement to keep things going until the traffic levels picked up. Within the first two years, there were complaints that it was too crowded.

Managing Tebay proved to be very difficult. Staff and resources had to be brought in from far afield, and its owners argued they were the only motorway service area which wasn't on a major freight route. As the family had negotiated a relatively cheap rent arrangement, they were able to charge lower prices, and decided to take advantage of this. They also issued meal vouchers with fuel sales.

The Tebay Mountain Lodge opened in 1978 with 32 rooms, built on a piece of land technically not part of the service area. This alarmed the Department of Transport who wouldn't able to regulate it. They had the same concerns with the Tebay Caravan Park which opened two years later, but they were won round and supported the idea.

"It is unrealistic to think that two operators could work on the terms originally defined."
Department of Transport MSA Branch, 1978

Westmorland were concerned that the Prior Report was going to lower its rivals' rent bills, meaning they would be able to afford to compete with Tebay's low prices. Tebay decided it was time to expand, and they invested in new facilities, new parking spaces along the access road and a new route for traffic. The Department of Transport conceded that their plan of inviting a second company to bid to run the main restaurant wasn't practical, and they accepted that Westmorland should run the whole place instead.

During the 1990s, the government sold its interest in motorway service areas, which meant the technical boundary between Tebay services and neighbouring land like the caravan park, hotel and High Chapel Farm became irrelevant. While this process was mostly administrative, the period of deregulation did seem to encourage Tebay to forge its own path, and to become more integrated into its surroundings.

In 1994, a coffee shop opened at Tebay, the first on the UK motorway network. The hotel was extended and renamed 'Westmorland Hotel' in 1997.

As Tebay northbound (often called Tebay West) has become more popular, the fact that it's so small has now turned into a problem. Several new parking areas have been added to the west, outside the original boundary. The woodland area to the north has been turned into the filling station, while a relatively small number of HGV parking bays have been painted in the original car park. The building itself has been extended considerable in the 21st century: first on the north side, and then in the south west corner.

The famous farm shop was added in 2003, but after regulations on service area shops were relaxed, Tebay was able to invest considerably in its gift shop too. It calls this "lifestyle" market, and the support for locally-made products has helped Tebay attract more local customers. Prince Charles had opened the farm shop, and he returned to the service area in April 2022, to mark its 50th anniversary. 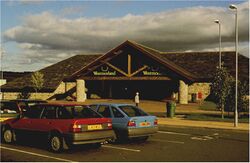 In 1978, a picnic area was proposed on the southbound side, which would provide catering for 30 people, parking for cars, a shop and toilets but no fuel. Westmorland were keen to take it on.

Changes to the government policy meant the Department of Transport were now willing to negotiate directly with potential service area operators. After being tempted to cancel the Tebay southbound plan, they were eventually convinced to let Westmorland develop it as a full service area. Internally it was still described as "Tebay East Rest Area".

The southbound service area opened on 3 June 1993, although several government documents insist it opened in 1985. It followed the pleasing architectural principles which had made northbound so famous, including its own artificial lake. The company head office was also moved here from Penrith.

As you'd expect from a newer development, it's more organised, with clearly defined parking areas. There is a picnic area further up the hill, although this generally functions as an overflow car park.

In 2008 the southbound service area was refurbished and became the first motorway service station with a butcher's counter. The counter has to order its meat up to a year in advance to be able to satisfy the high turnover associated with a service area.

In 2021, Which? Magazine calculated an 83% satisfaction score for the service area, making it second-best in the country, losing only to its younger sibling at Gloucester. It's quality of facilities, range and cleanliness were commended.

In 2015, VisitEngland gave the service area 5 stars. It was praised for its helpful and friendly staff, the lounge was said to be "much enjoyed by customers", the standards of cleanliness were highlighted, the quality of the produce was "excellent", and the views from the northbound building were "wonderful".

In July 2015, Tebay Services were awarded with the Samworth Brothers Rural Action Award at the Business in the Community Awards and were praised for being "genuine rural champions".

Tebay Services northbound was seen to be home to the 'most pedestrian-friendly car park in the UK' in a survey carried out in August 2015 by the Road Safety Markings Association.

In May 2012, VisitEngland gave Tebay south their first five star rating, with the northbound side getting four. The southbound gained a second five star rating in May 2013.

In 2011 Tebay northbound was the only motorway service area to enter the Loo of the Year Awards, and it was graded 5 stars.

In August 2011 the southbound services were rated 4 stars by VisitEngland, who said they had the best outside play area and landscaping and said it was best for families. However, also in August, Manchester Confidential suggested that the services suffered from the same pitfalls as many of the others when it comes to staff, food and cleanliness, with the only difference being the family values.

In October 2010 Sarah Dunning, the director of Westmorland, topped the Family Business category at the Institute of Directors' Director of the Year awards.

In December 2009 the services won a five star loo award and came top in the motorway services category, but few services took part in this.

In 2009 it won Egon Ronay's British Academy of Gastronomes' Grand Prix award, thought to be the first time a service station has ever won such a thing.

Also in 2009 it won the Northern Foods Rural Action Award in the Businesses in the Community Awards for Excellence. It was also listed in The Telegraph's top 50 farm shops, and The Times listed it as the best service station in the country.

In November 2006 the BBC's 'The Money Programme' loved Tebay's food but hated the prices that came with it.

Holiday Which? also loved Tebay, and in 2006 they chose it as the best service station in Britain. They said their decision was clinched by the local produce sold in the shop, and that Tebay "is the closest the motorway network comes to Harrods food hall".

The services were inspected by The AA on 3 and 4 April 2004 and it went against the general opinion of Tebay. These are their results:

The services were said to offer good food and a good shop, but the toilets, floor and showers were all dirty and it was the only service area in the UK to ever fail the 'quality of access roads' test.

A 1978 government review described the services as "too small and a bit tatty".

In 1977, Egon Ronay rated the services as "poor", and he concluded by calling it "sad because there are possibilities here". It was "pleasant" until you received your food. The pastries were good, which he put down to them knowing a good bakery, but the rest of it was poorly-made from cheap ingredients.